Frankie Update for the Year of the Dog

Nothing major to report – and that’s a good thing! Frankie’s heart is stable and there is no identifiable cancer. There is a very slim chance that he has a stomach based mesothelioma, but his other symptom make that difficult to diagnose. Currently there is not enough evidence in his blood work to suggest that there is mesothelioma or, if it is there, that it is affecting him. We’re counting that as a win. I also made a quick video with him that you can see below:

We are so grateful for his stable status and it is allowing us to catch-up a little bit. Rene and I will keep on updating via his fund page. Again, without your support we don’t know what we’d do.

Rene and I are so grateful for all of the support and assistance we have received for Frankie. We wanted to give you all an update on Frankie’s situation and let you know what your aid is going to:

We cannot thank you enough. We will continue these updates as we learn more about Frankie’s condition.

Our little man isn’t doing too well. All of his health issues are starting to catch up to him and are really taking a toll on his little body. Rene and I have been doing all we can to make sure that he is comfortable and happy, but as much as we try nature is starting to beat his medicines.

Last night Rene took Frankie to the vet and we got some distressing news – his body is holding fluid and there is a mass in his chest that right now cannot be identified through the fluid.

It was a devastating visit both emotionally and financially.

We have always half joked that as long as we have credit, Frankie will be cared for. Unfortunately we have now reached a point where Frankie’s medical bills have tapped us out.

Frankie is such a good boy. He’s a breed ambassador and makes friends everywhere he goes, not just for himself but us as well. Normally Rene and I like to only show images that show a happy and healthy Frankie, like these:

We have really great vets who are doing their best to care for him, but he has so many ailments that it’s tough nailing down what’s doing the most harm to him at any given time.

It’s really tough to be a Frankie dog right now.

We started a donations page for Frankie back in March when his first major cardiac event and that was a major help. He is alive today because of the kindness of those donors and we have had to reactivate it because of the extraordinary expenses related to his care over the last couple of weeks. Please visit his page at the link below. Any help you can provide goes directly to paying for Frankie’s medication and vet visits. We know after this last visit that there are more trips to the vet coming and likely more medications as well.

Rene and I do not like asking for help. We took on the responsibility of a dog knowing that it meant that we were supposed to care for him and we do our best to make sure that he is paid for, but there have just been too many bills coming too fast and we don’t want our dog to die of something preventable just because we couldn’t pay for it this week.

Thank you so much for checking it out and donating if you can. Words cannot express how much Rene, myself and especially Frankie appreciate it.

We have been hard at work on all of our new stuff and while we’re are still working on things like sketches:

The thing that seems to be taking off is our series of LIVE Discussions. These are weekly (Sundays at 11am Pacific Time) and recorded live on our YouTube Channel. We have a topic of discussion (usually arts or creativity related) and I assemble a panel of friends, co-workers, and contemporaries to talk about it for at least 20 mins (although lately we’ve been going longer). Once a month we do a Feature Discussion with a bigger panel. Feature Discussions last for at least an hour and I do a follow-up video of just the highlights after the fact. Below is a playlist of all the discussions so far:

Please check these out, feel free to click on any of the advertising (wink).

Rene and I have some big plans for the future, especially as we continue building our own content. We can do a lot on our own, but we could use some additional financial support to help raise the bar on our activities. Everything we’ve done thus far has been done on a shoestring where we beg, borrow and steal what we need to get a project done. This has worked pretty well, like with The Chili and Bloody Mary:

But with a little bit more money we can do a lot more!

Please consider joining our Patreon page. We’ve set-up some good starter rewards and I’m very pleased to announce that I got some of our art proofs back this morning for the merch that we will be releasing (actual release date TBD, but it’s coming!!!).

If Patreon isn’t an option, please don’t be afraid to click on the advertising links you see here and on the channel. I try to make sure that all of the ads presented are appropriate for the page and they should be set-up so that the items shown are things you, as the reader/watcher, would be interested in.

Thank you all for your support! We have seen the page jump in activity since we started – and we’re doing very well for only being about 4 weeks into this new effort! We’re really looking forward to what’s next!

Another fun one from the Wiggy Webs archives. This was supposed to be the first in a series of sketches, but the challenge of scheduling between writers, actors, crew and Rene  &  I was too difficult to maintain any kind of a real production schedule. However I do like this first one. I think it turned out very well.

Word of warning: There is adult language in this video so maybe not so much for the kids probably NSFW if you work at a very uptight place.

Let me know what you think. Should we do more of these?

8 Pit Bull Lies You Might Believe…and just a little bit of commentary.

As you are probably aware, Rene and I are big fans of pit bulls. Rene’s family have had pits for decades and our beloved Frankie is a pit mix (although probably mostly red nose). The dogs have a bad rap, as you are probably aware. The fact of the matter is that they are great dogs who are villainized and have some of their best traits turned to the dark side. The folks at Buzz Feed have produced a great short video about some common misconceptions about pit bulls and I wanted to post it here! Also, because it isn’t directly addressed in the video, pit bull jaws do not lock. They are no different than any other dog jaw. The more you know.

As a dog lover I would hope that Frankie would try as hard to find Rene and I during a zombie apocalypse. Of course, we wouldn’t leave him in the first place, but you get my point.

Writing the Little Nene story gave me lots of ideas for other children stories, especially ones starring Frankie doggy. This is the next one in the series and focuses on characters based on our dog, Frankie:

And my parents dog, Abby, who wasn’t actually crabby but was a bulldog so she had a crabby face:

Frankie Doggy Meets Crabby Abby
One day Frankie doggie was playing in the yard.
He was running he was jumping; he was playing very hard!
He barked and laughed and rolled around having lots of fun.
Eventually he took a rest from all the playing he had done.
Feeling very happy Frankie doggy closed his eyes, but then he heard someone else’s voice and it took him by surprise.
“You were making too much noise,” a gruff and crabby voice said, “now I have a pain that is pounding in my head!”
Frankie opened up his eyes and tried to take a look around.
He had been resting pretty peacefully until he heard this sound.
“I’m sorry,” Frankie doggy said, “I did not mean to harm.”
Then he wagged his tail and smiled, really turning on the charm.
“I don’t care if you are sorry,” the crabby dog said, “what are you doing playing? And then going to bed?!”
Frankie doggy was confused; the other dog was just so crabby!
He asked, “What is your name?” She answered, “Crabby Abby.”
Frankie doggy stood and cocked his head trying to pay attention.
The fact that “crabby” was part of her name filled him with apprehension.
“What makes you so crabby?” He asked, “Maybe I can help?”
“I’m not telling you!” She said, “You nosey little whelp!”
She turned away from Frankie doggy and sat her bottom down.
Frankie really wanted to help get rid of Crabby Abby’s frown.
“Would you like to play a game? Some fetch or tug of war?”
“No!” Crabby Abby said, “That will make my muscles sore!”
“Maybe we could have some food? Some kibble or a treat?”
“I don’t want it!” Crabby Abby said, “I do not want to eat.”
Frankie doggy scratched his head, his ideas were wearing thin.
Crabby Abby didn’t like too much, he didn’t think that he could win.
Without another thought of something he could do Frankie said, “I’m very sorry that my playing bothered you.”
Frankie walked away, head hanging low, to leave Abby alone.
Now Frankie felt crabby too and wanted to go home.
“I don’t have many friends,” Abby said and she cried.
“Your playing didn’t bother me. I’m sorry that I lied.”
“When I see other dogs have fun I want to have fun too, but no one ever plays with me! They never ever do.”
Frankie doggy felt badly for her, her story was so sad.
Frankie wanted to do something that might make her feel glad.
Without a word he turned around and walked back to her side.
Her leaned his head on top of hers trying to be kind.
Abby sniffed his face and licked it; her crabby act was all pretend.
It turns out all that Abby needed was Frankie as a friend.
The End

I have these pictures floating around on my desktop. I keep intending to use them for something, but I forget that they’re there since the internet is always open. so I’m posting them here as a way to share them and as a way to remind myself that I have these things. 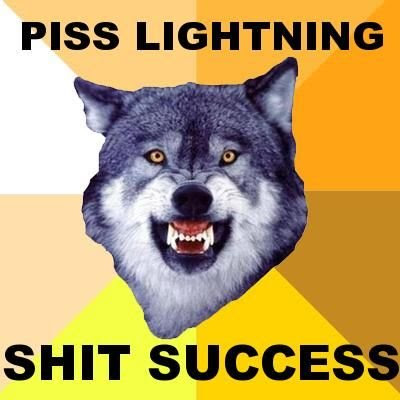 Courage Wolf – This is my favorite of the series. It’s like a personal motto. 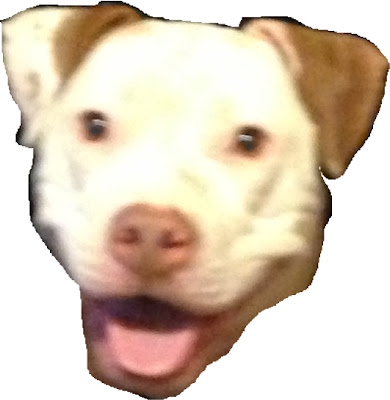 I would really like to turn this into a meme called “Blurry Dog.” Anybody want to help me with that? 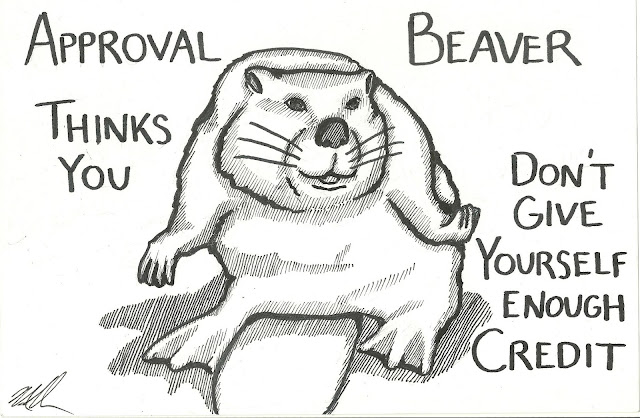 This is a picture by my friend and Shmimprov colleague Miles Taber. I’m hoping that he’ll soon produce t-shirts and prints of his artwork. It’s all awesome.
Happy Frankie was actually my cover photo on Facebook for a while. But I like his face here and maybe this gets meme’d out too? 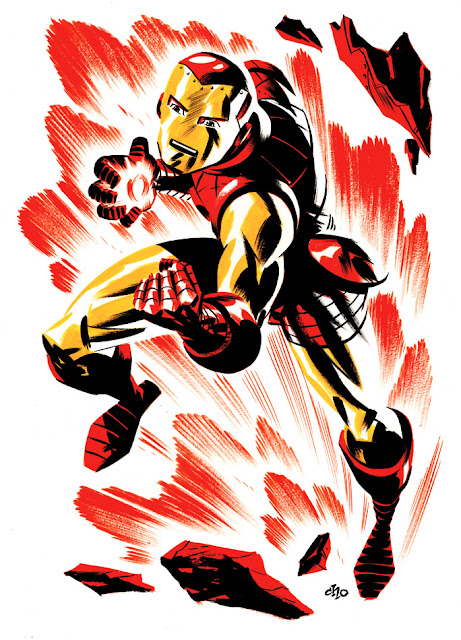 This is just a cool bit of Iron Man art by Michael Cho. I know nothing about this artist, but HERE is what I found on Google.
See you next time!