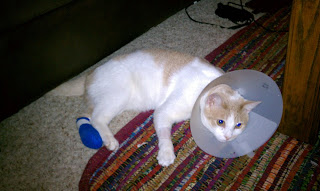 I said in the last post that I would mention in a separate post what I’ve been doing that has taken up all my time.

First off, “Earthlings Beware!” is a play that Rene and I are doing together at The Costa Mesa Playhouse. It plays Fridays through Sundays until November 20th. It is family friendly, funny and fun! It’s a send-up of 50’s Sci-Fi movies and does a great job of recreating that kitchy magic on a single stage. Rene and I made a video:

In video news Wiggy Webs has been posting regularly! Here are the videos you may have missed:

Also, movie stuff has been going forward at a hurried pace. Cheerleaders is casting and we are setting up meetings with talent. There’s also a pretty significant change coming to the film that I can’t technically announce yet, but I’ll give you a hint – there’s a reason we’ve only been referring to it by nicknames and as “Cheerleaders” for a while. There’s a new website on it’s way and some other new stuff. In the meantime go “Like” us on Facebook.

The documentary is wrapping up and with the workload growing on that it is very possible that there may be another drought of posts for a while – but I’m trying to manage that.

This may all seem like shameless self-promotion, and it kind of is, but this is truly all that I have been doing for the last few weeks.

Oh, and the cat needed surgery. Hurt his foot. Got worked on. He wears a cone now. The nightmare and hilarity that has been our cat in his cone of shame is documented better on Rene’s Twitter Feed

OK, I think that it.

Filed under acting, cheerleaders must die, Make Up with The Wolf, pets, shameless self promotion, Wiggy VonSchtick, wiggy webs