You know what I got to eat today for lunch?

You know why I had a lobster Cobb salad?

Because my meeting was in Bel Air and in Bel Air you are either the Fresh Prince or you eat a Cobb salad with a sea spider in it.

It is one of the benefits of my job that I get to do things like this.  Sure it’s frustrating, it’s nearly impossible to get anything financed and occasionally you run into some of the most UN-scrupulous people the world can offer, but a nice lunch with like minded individuals can make it all worth it.  Two of the finance guys that I met with today got their start as physicists – I had a meeting with rocket scientists who ended up in finance.  Apparently it’s not uncommon since it is easy for rocket scientists to do complicated math in their heads.  It was facinating.  We had an enlightening conversation about distribution and some new ideas about where to get financing for my projects (which was nice) and as we sat there I was in the correct seat to see this piece of art: 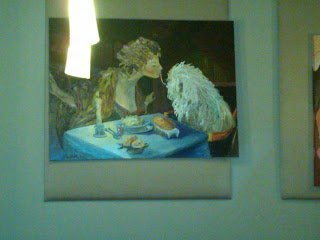 That fluffy thing is a dog and, yes, they are sharing a noodle.  Very Lady and the Tramp in a species co-mingling kind of way.  I saw this painting and first thought, “this has probably happened in this restaurant.”  My second thought was, “we are only a million dollars away from Rene and Frankie doing the same thing.”

Maybe not even a million dollars, might just be ten bucks.

Or a saw buck.