What is the most terrifying thing that can happen to a person who’s business relies on the internet?

The whole of the internet crashing in the middle of the day!

A close second is when your connection to the internet randomly drops in the middle of sending an email to a client, which is a hell of a lot more likely and happened to me today. 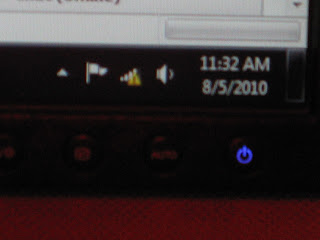 See that little yellow triangle?  That’s not good.  Still not sure what happened, it just dropped and all the phones went dead.  There were a few options that sprung to mind and so this is what I imagine might have happened:

I think the third is the most obvious answer.  When the connection dropped I was stunned into non-action.  I clicked on the little internet bars, checked the network, ran tests… all the things that you learn in Internet 101 that you should do if things go non-responsive.  Once I exhausted the “on computer” options I went to the modem and started fooling with that.  That’s when I saw the red flashing light – the DSL connection was gone!

That made me panic a bit – I don’t know how to fix a problem in the walls – so I checked the phone and it was tone-less.

That’s when my right eye twitched and I got very annoyed.

I asked the workmen if they had noticed any wires while they were working, they hadn’t.

I really didn’t know what else to do so I called AT&T and tried to get someone on the phone to report the outage.  Turns out they don’t do the whole “people-on-the-phone” thing anymore so I talked to a very nice computer simulation of a person who took my report and then scheduled an appointment for workman to come out – NEXT WEEK!

What was I gonna’ do for a week without the internet?!!?!?

I went right to my phone and resigned myself to the idea that it would be my computer for the next week as I waited.  Then I started thinking about places with WI-FI that i could work at – but it’s really hard to do business calls at a Starbucks, especially when you aren’t drinking coffee (the baristas start to talk).  I left the house to do errands bitching via Twitter and in texts to friends and loved ones about how my day was suddenly ruined from lack of internet and it made me realize – as it has several times before – just how easy it is to take all the information that we have access to at all times for granted.

By the time I got home whatever was wrong was suddenly fixed.  Facebook updated, the email I had been trying to send was sent and suddenly my buffer speeds on YouTube were faster, but for about two hours I felt like a caveman.

Am I addicted?  And if you said “no” is it possible that you’re addicted too and just don’t want to admit it?  Or is it OK since I use the internet for my business?  I’d love to hear your thoughts in the comments.