Even though I haven’t been on anything new since 2006 I can still be considered a bit of a minor celebrity so from time to time it happens that I am invited to events that involve a red carpet.  Tonight Rene and I went to see the premiere of a new comedy called Stan.  I was actually there to support a new project that I can’t speak on yet (there’s still stuff to work out which, by the way, is becoming my least favorite thing in general with all projects right now) and so there are photographs of me floating around the internet.

The premiere was held at The Academy’s Linwood Dunn Theater off of Sunset and Vine in Hollywood.  Because it is owned by the Academy of Motion Picture Arts and Sciences there are Oscar statues everywhere!  Today’s picture of me next to one of them: 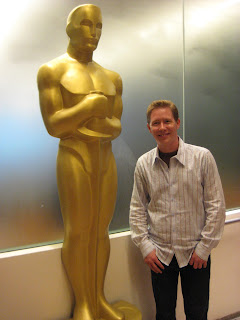 I’m not going to talk too much about the red carpet itself because there isn’t really all that much to talk about: you get your picture taken, somebody is usually taking video, the pictures end up on Wire Image and, if you’re news worthy, news outlets buy them.  It’s the vibe of the red carpet that is the interesting, if not completely depressing, part.

I’m going to try and talk about this as evenly and objectively because it is really easy for me to get flippant and glib and really snatchy when it comes to the over-all feeling at a red carpet.  With the exception of the people who are supposed to be at an event (cast and crew mostly) everyone else there who is hoping to get on the carpet is pretty much looking for publicity.  This includes both the people you would expect want publicity (celebrities) and those you’ve never heard of (wannabes).  Going forward I should make it very aware that I am NOT above these classifications.  For you “Sabrina” fans out there I might still be a celebrity, but to most of the rest of the world I pretty much fall into “wannabe” land.  I get it, I know it and because my lively hood isn’t completely dependent on everybody knowing who I am (although, frankly, it wouldn’t hurt) I’m just a little more immune to the effects of the carpet, if being immune means feeling REALLY out of place.  The worst thing about the carpet is the sense of desperation that permeates the air.  It really throws off the vibe of the whole room.  There are people who are there strictly to become famous no matter what the cost.  Let me be clear – the people I am talking about are not looking for artistic worth or to make a statement they want to be famous, just famous, and will go to virtually any length to achieve that goal.  It’s been a while since I’ve been on a carpet and it’s an easy thing to forget when you haven’t seen it in a while.  It really makes me uncomfortable and it sparks really awful instincts – instincts that the cattiest gossip monger would be proud of.  Of course being catty is just a defense mechanism.  There but for the grace of God go I should I ever take my eye off the ball.

The lie of fame is enough to blind even the most noble or intelligent of people.  It’s claimed more people than anyone would want to admit and it is showing no signs of slowing down.  As I stepped back into this aspect of the career I do it with a clearer head than I had over a decade ago when it seemed easier to do.  Thinking about it as a means to an end rather than as the end itself is a good way not to fall victim and I’m really glad to have Rene around to help keep me grounded.  All that being said it’s possible that there are going to be more of these events in my near future.  Hopefully all the work that is going into the project-that-cannot-be-named will pay off and I won’t be so out of place.  Even if it doesn’t it was nice to get back on the carpet again, warts and all.  Next time I’m getting Rene in pictures too, if she doesn’t mind.