Today was not so much a day as it was a night.

The day was a typical wake-up-teach-go-home day.  After class I ran up to L.A. to celebrate my friend Zeke’s birthday!  I thought I was going to use a picture from that as today’s picture, but I forgot my camera.  We had a lot of fun, but I had to beat feet at 8:30 to get back in time for the Shmimprov show that night.

It was a pretty funny show, even though I went off on an audience hating diatribe during Oscar Winning Moment.  We had recurring characters over a couple games, including me as a kangaroo.  Kinda’ had to be there.  I thought I would use a picture from that performance as today’s picture, but I forgot my camera.

After the show a pair of arms wrapped around me and scared the hell out of me!  Fortunately I noticed that the left hand was wearing a very familiar engagement ring.  Rene had surprised me by showing up during the show!  She herself had been in B.F.E. doing a show of her own and I didn’t expect to see her.  It was a very nice surprise.  I thought it would be nice to use a picture of Rene or Rene and I for today’s picture, but I didn’t have my camera.

Fortunately Rene had her camera and we stuck around for some karaoke after the show!  So today’s picture is of me signing a song: 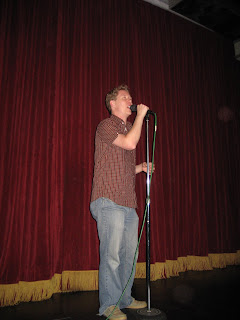 I have no idea what song it was.