Meetings in L.A. in the morning and that lasted until about 2:30.  There are a lot of really good opportunities out there right now but even the good ideas are struggling to get money.  I vacillate between being extraordinarily frustrated and inspired.  It makes me sleepy.

I also think I might be able to make a career of just making sizzle reels, just booked two more of those.

On the actor side, I’ve been a little lax since boldly making the statement that I was reclaiming my acting career – but I have been auditioning a lot more and that’s REALLY nice!  Today was a commercial audition for Best Buy and we got to have a lot of fun pretending to be in a box.  In a apprapo(sp?) coincidence I had a conversation with one of my private students on Tuesday about read vs. look.  He was prepping a practice scene and said with a bit of defeat in his voice, “So it’s like 10% how I read this and the other 90% is my look, isn’t it?”  This is the great actor excuse.  I’ve used it, you’ve used it – we’ve all used it.  It makes you feel better about losing a job when you feel like you can say, “oh they went another way – clearly I was good enough but my hair color/eye color/height/weight/whatever was wrong.”

As I told my student, there is always going to be a certain level of “look” in every audition and it is impossible you you to know how much that is going to play into the final decision.  You have no way of changing what you fundamentally look like so it is your job to go in as prepared as possible with the things that you can control: your read, your character and your demeanor in the room.  Don’t stress about anything else.  Hell, they called you in based on a picture that they’ve already seen.  If they didn’t like your look they didn’t need to call you!

Oddly enough I walked into the audition room yesterday and the first thing the other guys said in the lobby was, “It’s all about the look, no lines.  I don’t know why they don’t just cast these without an audition.”  Suddenly I had to take my own advice.  Knowing there were no lines actually makes the acting harder.  There’s nothing to say that you can play off of so it’s all about what you do and there’s a very thin line between what will work and what is over doing it.  The audition was really loose and all soundless improv so I just let my imagination run – we had a lot of fun!  Excuses take away your power and there are plenty of people trying to do that to you, especially in this business, so it’s a horrible idea to do it to yourself.  If Hollywood has taught me anything it’s that results matter and excuses don’t.  Today I made results in the face of excuses and that felt good.

Today’s pic is of me by the sign for the studio: 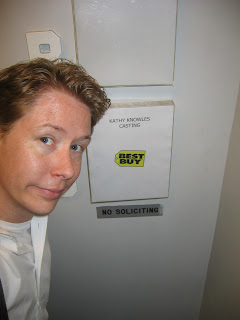