Today was election day and in addition to the normal parts of the day I made sure to block out some time to vote.

Voting is something that I think about more now than I used to.  I remember when I turned 18 I made a commitment to myself that I would vote in every election and do my part as a citizen.  I have been registered as three different political parties: Libertarian, Democrat and Republican and what I have learned from all of the party literature – no matter which one it is – is that they have great ideas about how to spend my money and they want to be elected for as long as possible whether they do the job or not.

It pisses me off.

In my perfect world politicians would not be allowed to make a living at all as a politician and they would not be allowed to accept any money whatsoever for their campaigns – in fact they would have strict and severe limits to the amount of money that they would be allowed to spend on campaigns period and then at the end of the congressional session they would return to whatever jobs they are supposed to have and they would be looking out for the well being of the people.  OK, there are, like, lots of things missing out of that massive generalization, but I hope that you are catching my drift.  I don’t like that politics are full of people who really just want power and aren’t in office to govern.  The political fighting between to two parties disgusts me and if I hear any one on either side claim that we need to “take the country back” then I might just vomit.

I really wish that it were possible, on a national level, to discuss different political ideas without it resorting to name calling and attacks and sometimes I feel like voting for anyone is just perpetuating a cycle of placing assholes in places where they can do the most damage.  For a while this idea was enough to keep from voting.  I just gave up and snorted when bad things happened thinking, “well look what the people who voted brought on themselves.”  But I’ve since changed my mind.  Besides being cynical, that state of mind is also petty.  Am I still pissed off?  Yes.  Do I still feel like the wrong people keep running for and therefore get placed in office?  Totally, for the most part.  But I’m back to voting at every opportunity.

It used to be that I was angry but I didn’t know what to do with that anger.  It got lashed out and, frankly, wasted.  Anger can be a powerful motivator provided that it’s pointed at the right goal.  When I wasn’t voting I had no real way to show my dissatisfaction.  So I vote and when I do I make sure that I make my point clear on the things I want and what I don’t and, when it comes to the candidates, if I don’t feel that you’re qualified I want you to know that I took the time to vote and that I especially took the time to not vote for you.  Vindictive?  Maybe, but as I mentioned politicians piss me off.

So I’m sending this message to the youth and to my jaded and cynical peers: vote no matter what.  What you want might come slow, but it’s guaranteed not to come at all if you don’t speak up.

Today’s picture is my voting stuff: 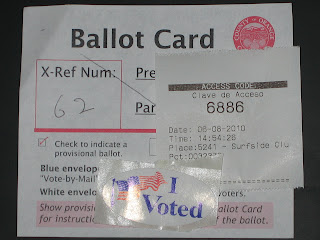