Right now deadlines are the bane of my existence.

I used to really like deadlines.  I work well under pressure.  It takes away the luxury of of worrying about a decision, you kind of just have to go with your gut.  I like making decisions.  I can live with making decisions even if they might not have been the best decisions, but what I can’t do is make other people make decisions any faster than they do and it is frustrating the hell out of me.

I went through all three phases of this today.

Between the wedding, the show and three different movie projects all waiting on other people Rene and I are just about at our wits end.  Around the corner is either paradise or tragedy and we don’t know which one it will be.

I keep re-writing the next section of this blog and it keeps coming out like a “Gipper” speech.  It’s horribly cliche and doesn’t even come to saying what I want to get across so I’m going to quote my Twitter instead, “I’ve never let anything stop me from doing what I want & I refuse to let that start now.”

Today’s picture is of my bag: 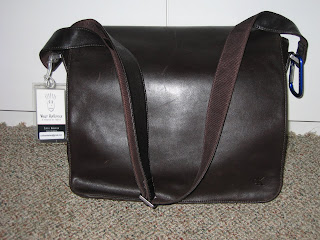 It is what I carry my business around in.  It was with me all day today ready to be opened, even though I didn’t open it until very late at night.  It is starting to show the signs of it’s travels: a “D” clip from Sundance here, a luggage tag there, distressed leather in the spots where it rubs against my belt loops.  I kept hoping that during my day I would find the time to use up some of this frustration energy that has been building up, but it didn’t quite work out.  Now it’s just patiently waiting for tomorrow when I wake up.


It’s getting a lot of use then.