Rene and I were hungry, but we didn’t know what to eat.  We ran errands until we could think of something.  We stopped by my parent’s house, no idea what to get.  We got back in the car, no idea what to get.  Eventually, because we were by Fullerton, I suggested the Old Spaghetti Factory.  Rene countered with Rutabagorz…

After Rutas we headed over to The Olde Ship for sticky toffee pudding and a beer.  Since this was also the same night as the US vs. England World Cup game the whole pub was deco’d in Union Jacks but we heard nothing about the game.

After that we made the spontaneous decision to see Shmimprov.

Today’s picture is of the clock when we rolled in and were about to sleep: 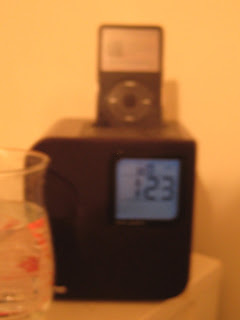 Of all the fun stuff we did tonight this is when I remembered to take a picture.

I was so disappointed.