Today was a longer than expected shoot day for a contest to win a show on Oprah’s new network.  Director Zeke and I had a call time of 2:30pm with an expected three hour shoot for a three minute final video.  We actually shot for five and a half.  We arrived to a bit of a talent emergency, one of our guys had run into a major car problem – all the oil was gone and the radiator was leaking.

He was gonna’ be late.

Oddly enough the other guy that we hired for this small video was a friend of mine – but I didn’t know it at the time.  He was calling in that he was going to be late as well and as we talked I suddenly realized who he was.  It was wild!

When I imagined this blog I thought I was going to have all kinds of fun stories about how the shoot went and little things that went awry or well, but until the video is released I am not really allowed to give any clues about what we did – to be fair to the client.

Story wise the best ones are about poor Darric and his car: It crapped out at the bottom of the hill from where we were shooting, I had to jump the battery and Darric’s poor girlfriend was so understanding, but I really felt for her.

Today’s picture is of one of the cue cards that was written, but ignored: 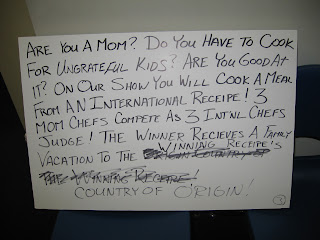