Our Sunday’s are becoming the least memorable, least exciting days of the week.

I was really tired.

Rene and I were supposed to go to Target to get stuff, but the Tony’s came on and we parked in front of the TV and watched the whole show… even the parts when the sound was either screwed up or all together gone.  I find it very hard to believe that the highly trained sound professionals on Broadway, Radio City Music Hall in particular, people who are used to doing live shows eight days a week, cannot do a better job with a live broadcast.  Even assuming that the sound guys were from network television staff, these guys are supposed to know their stuff and it was strictly amateur night.  I was reminded by one of my Tweeps that the sound was pretty bad last year too.  And how about those cock-ups with Chris Noth and Sean Hayes when they had no idea what was going on or where to look.  I miss theater, I miss it a lot, but the award show left a little to be desired.

It still made me want to pick up and move to NYC, though.  GAH!

Later Rene and I went through a bunch of candy.  Today’s picture is the bone pile: 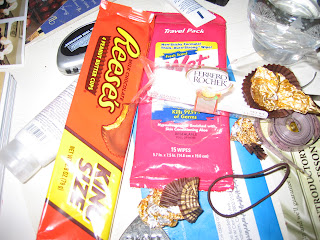