The second Easter happened on the actual day of Easter at Rene’s parent’s house.  Again it was a whole lot of food that involved ham, baked macaroni (do NOT call it macaroni and cheese!), corn, baked green beans and salad.  Then they got us with the dessert!  New Orleans style bread pudding, strawberry shortcake and tart lemon cake.

These were, literally, two of the least productive, least active days I can remember.  Even though I played with my nephews a little, even though I decided that yesterday was the day to learn how to play Rock Band using an instrument I can still count these two days as very low impact.

Speaking of Rock Band, I wasn’t kidding when I said I was finally learning how to play using an instrument.  I know I’m late on the “Band”-wagon here but I don’t have a game system at my house (I’ve never been much of a video gamer) and all my friends who do are already mega-experts so I feel self conscious playing with them.  Today, since the nieces brought over their copy complete with guitar and drum kit and since most of the family was busy watching The Princess and the Frog I had a chance to learn me some skills!

I settled on the drums 1) because I used to play drums when I was younger 2) because it made sense to my brain to play a rhythm game with a rhythm instrument and 3) because my fingers do not like the frets on the plastic guitar.  I sat myself down and did the whole warm-up section of songs as a play list and played through the whole thing.  I did pretty well, but knew I’d require more practice – after more food.

I took a forced sabbatical, there were other players playing, and learned by observation about some of the nuances of the game.

Then I created my rock star – Andros the hair-metal, super thin drummer straight out of London!  He went on a short tour.  During my tour I felt the Earth move beneath me.  At first I thought I was just dizzy from watching a video game for so long, but then Rene came running in suggesting that we might be having an earthquake.

My rocking did not stop.  Natural disaster or no I had a set to finish and my digital audience didn’t want excuses – they wanted to rock!  And rock them I did.

As soon as I was done, though, we turned on the TV to see just what had happened – a massive 7.2 quake just south of the boarder in Mexicali, Mexico that was felt across three states (California, Nevada and Arizona) and kind of explains why Frankie has been so jittery the last week.  Within an hour two Facebook groups were formed (one proclaiming “I Survived The Easter Earthquake of 2010” and the other “I Didn’t Survive The Easter Earthquake of 2010” – only on Facebook…), we had heard from many of our friends from across the country and we were educated by Cal Tech all about what we should expect for the next few days.  For us in the L.A. area that amounted to just about nothing.  It was a wild divergence from what we expected on Easter this year.

Today’s picture is of us before the quake: 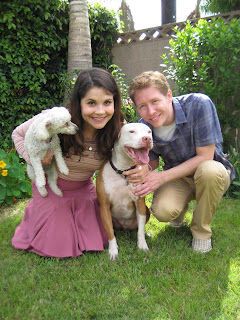