Is it Earthday?  No, apparently not.  Tomorrow is Earthday, but ever since 1991 and I first heard the Dramarama song “What Are We Going To Do?” all I can think is that, “it’s April 21st and everybody knows today is Earthday, Merry Christmas, happy birthday to whoever’s being born.”  It’s an inaccuracy that shouldn’t matter, but every year it makes go a little crazy.  Was Earthday on April 21st that year?  I suppose that I could look online and see, but that kind of ruins the fun.  A little scheduled insanity on the calendar never hurt anybody, at least that I know of.

Today was another training session with Tony, the breaker of bones and wills.  I am still sore from Monday and today we did a series of free weights that has already made me feel like my arms are made of lead and about as useful.  When we completed that workout I decided that my abs weren’t punished enough and did a bunch of work on them too.

As much as I think I’m being funny with my workout complaints I’ve actually really enjoyed getting back in shape.  The running, punching, lifting and grunting is helping to relieve the stress as I wait on other people for the deals that I’m working on right now.  I completely cop to the fact that I don’t like it when my destiny is in the hands of other people, but that’s the nature of this business – there’s only so much that you can do on your own.

Another side effect from waiting and working out is that my creative juices are flowing.  I’ve had an idea for a web-series that I’ve been tossing around in my head but I figured out, at least intellectually, how to actually produce it.  I don’t know how quickly I’ll actually move on that, there is so much other stuff that I feel has priority, but I like the feeling of being a “creative” again and not just the “business” guy.

Speaking of businesses my sister has just started a new cookie business!  Her first orders go out this weekend and I was asked by her and my Mom to help come up with some temporary labels for the packaging as Molly gets her logo made.  Today’s picture is of the label test sheet: 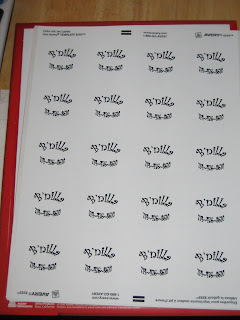