I’m not a fan of the television program “The View.”  I can’t put my finger on why, exactly, but it rubs me the wrong way – although since Whoopie has been added to the mix I find that I can have it on in the background and not be completely distracted.  Today they had Vice President Joe Biden on the show.  I watched his segments because I’m starting to feel my “politics” again and I’m trying to pay attention to what is actually going on versus what each side is saying about each other.  To other people my age and younger: now is the time to start paying attention and get involved!  Anyhow, I thought the Biden stuff would be all fluff, and there was quite a bit, but they actually talked about some issues as well – mostly taxes and how the Obama Administration would be approaching them.  It was a good little talk, but way too short.  Now I need to find time to actually look up the Wall Street reform proposals and how they will effect me.

In other aggravating news about ridiculous things that make no sense to me, Rene got a new job doing HR for a marketing and sales firm that I can’t name by name since I’m going to be talking eight different kinds of shit right now and I don’t want to be sued for liable – or slander.  I forget which one is for writing (I’m pretty sure it’s liable.  Did I even spell that right?)  Anyway, this is third-party since I’m only getting Rene’s POV, but it sounds like this company has no Earthly idea how to run their company.

EDIT: OK, I’m leaving in the first paragraph but cutting out the rest of my rant.  Rene is actually writing and article on this subject that I believe will be posted on her blog when the job ends.  It’s a temporary gig.  I’m not a fan of corporate culture, especially when it endorses idiocy and cruelty.  I’ll just leave it at that.

The more I think about the day the more I realize that I was just straight up angry today.  I didn’t here from the people I wanted to hear from, I’m feeling the pressure of time on all of my projects and I feel like the people in power all over the place are more concerned with bickering with each other than actually making things happen…

Actually, that might be the root of my anger today: everybody’s talking but nobody is doing anything!  God, it’s frustrating! 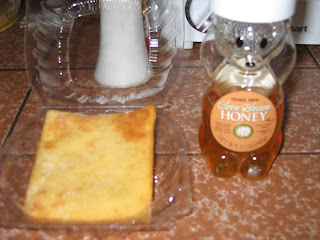 It’s a sopadilla and honey.  Delicious and sweet.  A complete opposite of the day.