Apparently my dog has been reading the rants that I’ve posted lately about politics here in the blog and on my Twitter feed because he decided to make his political opinion very plain.

Frankie is a really good dog with one bad habit: he thinks that the mail coming through the slot is trying to kill him.  When the mail comes through the slot he grabs at it and pulls it through to make sure that he “kills” it before it kills him.  This leads to little holes in the bills and chewed pages of magazines.  He has no quarrel with the mailman.  When we open up the door and he sees the mailman his tail wags and he licks his hand and is generally excited to see him.  And if we just show Frankie` the mail he does not feel threatened and does not attack it.  It’s all in the delivery through the slot that gets him going.

We have made great strides to keep him from attacking the mail.  It took a while, and the threat of a wapping from a rolled up news paper, to get him to go to his bed when the mail was delivered.  As long as there are people around he is now very good about not attacking the mail.  If we aren’t home there’s a 50/50 shot that the mail will be punctured by the time we get to it.  Then today I got home from the gym and the mail had been delivered while I was out.  Most of the mail was just fine, all of it actually except this: 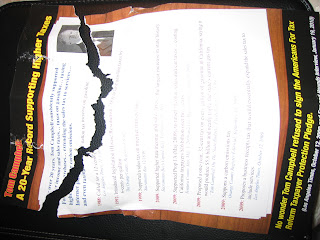 Our picture for today is Frankie’s response to a political mailing.  It is the only piece of mail he damaged and I thought it was funny.  The only other time he has done this was when we got a mailing from PETA, who have an incredibly ignorant policy against pit bulls.  I’m now pretty sure that Frankie is taking after his Mom and Dad on the political front with our complete distaste for all career politicians.  He may become the leader of the Brindle Puppy Party (get it?  Instead of the Black Panther Party?).