I’m not a big fan of April Fool’s Day.  I remember, back in the drunk times, playing a few pranks but none that stand out as all that impressive or funny.  There were a few good Facebook gags today, though.  Some of my friends made the most of it, one by completely re-doing his page to make everything from his photos to his favorites lists be the complete opposite of who and what he is and another who lived out a whole relationship via his relationship status.  Even Rene and I got into the act – completely by accident.  I tried to type out the story in a way that makes sense, but it just reads like a mess so I’ll cut to the chase – people thought Rene was pregnant.

I even got a text message about it.  It was pretty cool, even if it was an accident.

My parent’s dog, Pete, had an upset stomach and yacked all over the house.  Once on me, once in the hall, twice on the couch, twice on the rug in the dinning area and once in my parent’s room.  It was awful.  Thankfully he’s ok.  We’re not sure what he he ate, but it seems to be through his system now.

Rene and I also got a chance to taste at one of our possible wedding venues, The Hacienda, today.  This is the place we keep raving about on Twitter (her Twitter too).  We take a trip to a winery tomorrow, then get ready for the holiday weekend. 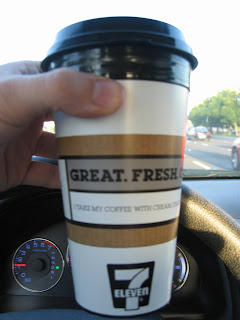 This was an excellent cup of coffee.  It was so good it inspired me to take a picture.