It’s late.  We had a very long day involving business calls, emails, Runyon Canyon, a business meeting, a cafe, “One Flew Over the Cuckoo’s Nest” and a Shmimprov roast.

For those who could not attend the roast, Sean did not cry – but he looked like he got close.

“…Cuckoo’s Nest” was moving and powerful.

I also learned that I still fit in my wedding tux – a shocker!

I’m going to skip right to the photo which tonight is a picture of me and Frankie at the M cafe after Runyon Canyon, where I learned you can get a surprising amount done even as you climb the hills surrounded by dogs. 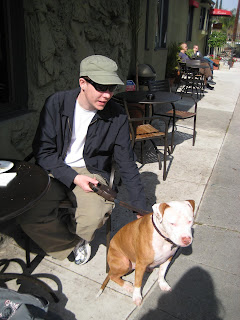