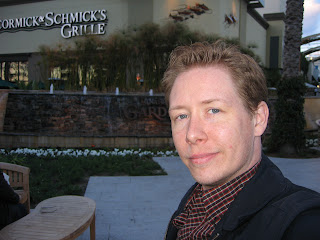 This picture feels like a throw back to 2008.  Today was spent preparing for two meetings.  Well, actually one meeting and one conference call.  As I prepared I also reloaded all of my music back into iTunes.

I’m getting a little too used to having to re-load my iTunes.  I have really latched on to using “the cloud” on the internet and I look forward to the day that all my songs are there as opposed to my hard drive.  This is the third time in two years that I’ve had to re-load everything, but a nice side effect has been the re-discovery of music I didn’t know that I had!  It’s a royal pain to have to redo all my playlists, though.  Is there a way to save those?

My primary meeting was at the Garden Walk in Anaheim.  It isn’t often that I get to take an actual entertainment industry meeting in my neck of the woods so when the opportunity arises I jump at it.  There isn’t much I can talk about from this meeting or the phone call that followed, but the picture of me leaving the Garden Walk and the satisfied grin on my face pretty much shows the tone of the day.