I made this today: 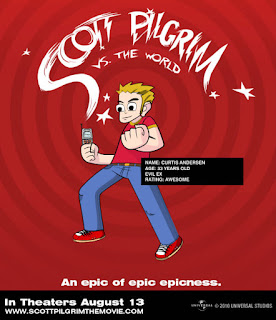 That’s my Scott Pilgrim avatar.  I have totally bought into the hype.

Well, I guess not totally because I haven’t bought any of the comics, but I liked the avatar thing.

Tonight I celebrated an area of my geeky-ness with Dean and a couple new friends.  I have many different geek sides:

But the side that got it all started, the side that I found interesting as a concept and not just as a play idea, was comic books.  I mentioned in an earlier BLOG about my first issue of Iron Man and how it got me started on the Golden Avenger and that interest hasn’t really waned since 1983.  Even when I was bitter and not collecting I still peeked at issues out of the corner of my eye.

Tonight my comic side was indulged as we geeked out about comics, storylines, movies and T.V. shows that were all about super heroes and the books they were drawn from.  This culminated in going through Dean’s long boxes and remembering the good ol’ days of the late 80’s and early 90’s before Image came – before the dark times.

You’d think that my picture today would be of our comic book archeology.  You’d probably think that it would be grate to have an image or two of the rare comics in Dean’s collection – some of which I had never seen before in person – or of the signed issues by very famous and infamous creators, but no: 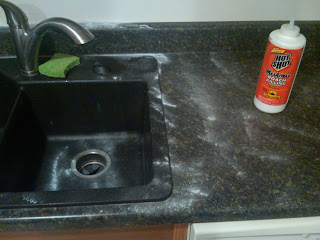 Today’s picture is of Dean’s sink after we covered it with anti-ant & roach powder.

It looks like Tony Montana sneezed on his counter top.