Or did I dream it?

No, totally saw it.  Totally enjoyed it.  More important to me was the just the fact that Rene and I managed to get out and actually see a movie!  I’m sure I’ve talked about this before, but it is very hard to get out to see movies when you’re trying to make them.  At least for me it is.  Add to a heavy work load the fact that Rene and I are on opposite schedules and it’s a recipe for failure.

But good planning is the anchor for success and we have a good plan!  Sunday is for Scott Pilgrim and I’m VERY excited about that!  Also I think I have laid enough subtle hints (i.e. screaming, “OMGOMGOMGOMG!!!!”) to convince her to see Tron Legacy when it is in theaters as well.  Here’s hoping Disney will get another Tron ride in the park!

Speaking of Disney we saw the movie at Downtown Disney and I was surprised at how busy it was on a week night after the movie got out, which was about 11:30pm: 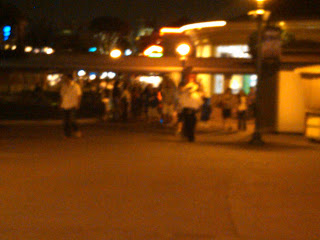 I don’t know if this picture really shows the number of people that were there, but it’s the picture that I got.  Most of the restaurants were closed too, so I have no idea what they were able to do.

I’m sure they found something.