I’ve been house sitting for my parents.  I haven’t mentioned it until now, with the small exception a couple days ago, because I, and I freely admit to this, sometimes bend the truth online about where I am so I don’t end up coming home to a robbed house that the robbers knew was empty due to my Twitter feed or blog post.  That’s one of the drawbacks to a know-everything-all-the-time world, people tend to know everything that you care to tell them all the time!

Back on point, my parents have two dogs that require watching when they are away: Abby the 5000 pound bulldog and Pete the 7 oz. ferocious chihuahua.

OK, Abby doesn’t weigh 5000 pounds, but she’s a big girl.  Probably fatter than she should be, and Pete actually weighs somewhere closer to 7 pounds, but he does have Napoleon syndrome and barks viciously at anyone or thing that gets close – until I walk up to him with a stern look where he then cowers and lays down.  Even with these physical/personality traits the dogs are pretty easy to watch.

My favorite part is the walking!  My dad likes to walk them separately, but I prefer walking them together.  Abby is a lazy bitch (Get it? Cuz she’s a female dog!) and will usually only stand if you try to walk her by herself – but when Pete is around these two zoom through the neighborhood like Barry Allen and Wally West!  Well, at least until Pete decides to pee on something: 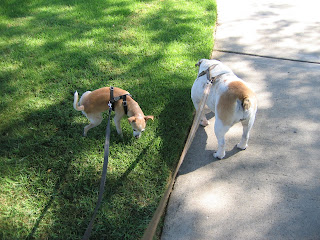