Frankie got his sutures out today!  Finally our Frankie-stein is one step closer to being just Frankie again!  While were waiting in the lobby at the vet’s office Frankie met a girl named Jasmine.  She’s a Lab and they ended up making out, like, the whole time in the lobby.  Her owners were very nice and it really helped Frankie relax to have a friend in the lobby.  It took the doctor and myself to drag him across the linoleum so that they could take out the staples, such a sad sight!

Today’s picture is actually a twofer!  It’s before and after pics of Frankie: 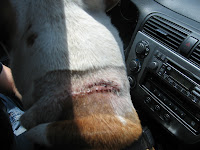 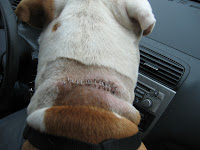 Also my mom told me that she believes that my bathroom is haunted.  I’m about twenty feet from it right now waiting for something spooky to happen.  Maybe that will be my picture for tomorrow.