Got to get back to business today.  Had a finance meeting this morning at 8am in Sherman Oaks.  Oddly enough I made it to Sherman Oaks in forty minutes and that would be the easiest trip that I had today.

Got to be home for a couple hours – answered emails, cleaned up my calendar and downloaded new podcasts – before heading to a pitch session in Newport Beach.  The pitch went well, free lunch, all good…

…then I tried to head home.

This will be a traffic situation that will be remembered for at least a week, maybe even a month: The Great Truck Explosion of 2010!

I have no idea what the details were, but here are the rumors that I’m re-spreading since I’m not a news source, I’m just a dude who talks about his day:

At least that’s what I heard.

The only truth that I know is that traffic in O.C. was completely fucked by this little truck accident and it took me over two hours to make a drive that I can typically make in just under thirty minutes – and that was me trying to take the LESS CROWDED ALTERNATE ROUTES!  As far as I know there are people trying to get to Vegas that are still in California nine hours after they left.

Today’s picture was going to be of traffic, but you’ve seen me do that so instead I took a computer’s rendition of what the traffic looked like in the section of the world where it affected me most: 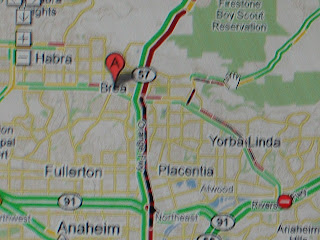 Now I’m going to consider drinking the drive away.