Before we begin, a video presentation:

I found that on Facebook today posted by my friend Kristin.  I think it’s important to point out stuff like this because it’s easy to ignore things when you don’t see the final outcome or consequences.  I used to watch Penn & Teller’s Bull Shit on Showtime, I even own the first three seasons on DVD, and even though  they were definitely pushing an agenda I really liked seeing a different perspective on very hot topics.  What I liked best is that they could back up a lot of their claims with straight up facts.  Verifiable, cross-referenced, generally accepted facts.  There was plenty of editorial tossed in, but the facts were there all the same.  I stopped watching when I stopped paying for Showtime, is the show still on?  Just checked, it is.

I have been very bad about my workouts this week, I’m definitely placing higher priority on movie biz things then on my fitness and I’m a bit conflicted about it.  I try to ease my guilt of not working out by checking off stuff on the task list.  Honestly that could be shrinking a little faster too, but whachagonnado?  I’ve found that, in all the mire, I’m keeping my personal integrity but it isn’t making the choices any easier or making things move any faster… but I have made a commitment to not randomly vent on this page – if I did there’d be noting else – and I’m trying to push myself to write more story-like posts, in the vein of The Tobolowosky Files from /film.  Since all of these posts for the rest of the year are focused on the actual day and its associated picture it’s been hard to do genuine reflection, I mean, at best I get a day to think about what happened and the effects of it all, but I’m enjoying looking for that one part of the day, a certain hour or five minutes, that ignites deeper insight then just a list of what went on through the course of the day.

I just thought about what that would look like on paper.  Here’s the last couple days as a list:

Most days I could literally copy/paste this string and it would be 90% accurate.  Although tonight I added a trip at the end of teaching to watch Doctor Who with Dean and then get to the grocery store for some general supplies.  Then home.

Today’s picture is from my trip to the store: 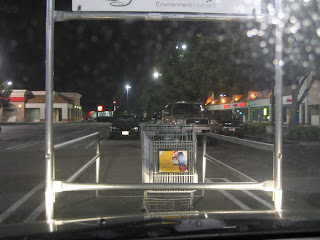 The cart just seemed so lonely.  I think I might be thinking too hard when I start impressing emotions on inanimate objects.