Day two started out with a bang!  The Reduced Shakespeare Co., two of the nicest fellas I’ve ever met, packed the crowd before their performance even began!  They did readings from their new book as well as their classics like “The Complete Works of Shakespeare: Abridged,” “The History of America: Abridged” and “The Complete Bible: Abridged.”  They had an autograph line that lasted for over an hour!  The toughest part of their performance was at the end when an English gentleman came up asking when they would be performing again.  He had seen them back in England and was so disappointed that he had missed them, but I know he got chance to speak with them after so that’s pretty cool. 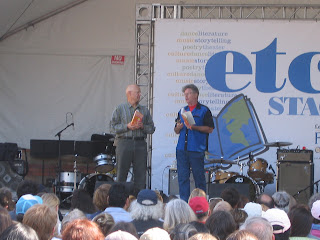 Then BOOM! Studios was back with a full panel of writers talking about upcoming projects and how to break into the industry.  Very informative, especially when they got to the idea of new media, the iPad and the future of comic distribution. 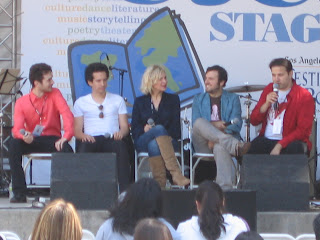 From comics to culture, the L.A. Opera was up next.  I really enjoyed meeting both singers and their accompanist.  I immediately felt like we needed to add crystal chandeliers to the stage, they were really classy.  We also talked a little bit about the running of an opera company which isn’t much different from most other kinds of business management.  Of course the story I don’t want to tell is how I had a major German fail as I tried to pronounce the name of the opera they are doing this summer.  I found out later it is known as the Ring trilogy – so I joked about it being the opera equivalent of the “Lord of the Rings.”  That went over pretty well. 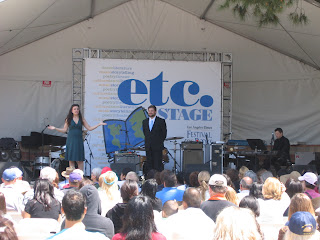 Another band after that: Shadow Shadow Shade!  I have never been asked by so many people who was onstage.  They were VERY popular and grew a huge crowd as their set progressed.  They just recently changed their name and so they didn’t have any merch to sell, which totally sucked for them!  They could’ve paid for a tour with the attention they got on Sunday.  Check them out if you can! 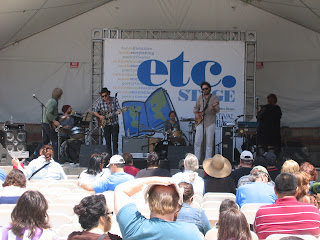 We had Joey King on after.  This was my first introduction to Joey King which just goes to show how out of touch I am with children’s entertainment.  She was a delightful child actress and the kids really dug her.  She had an insane autograph line!  They were apparently rumors going around that Selena Gomez, Joey’s co-star in “Ramona & Beezus,” would be at the stage as well.  The crew and I were a bit panicked that there would be a riot, but she wasn’t there and there wasn’t a riot so all was cool.  Crisis averted. 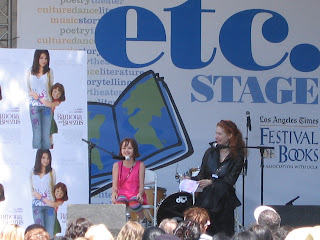 Cielo Nuevo returned!  Again they filled the crowd to capacity!  This time they added dance.  I took the picture too early and couldn’t get back stage to take a picture of all of their bright costumes, but they were a lot of fun! 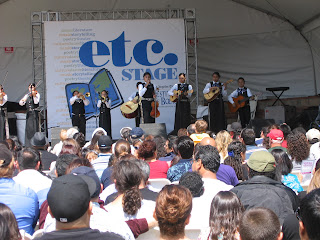 Murphy’s Flaw bluegrass group has been a regular on the Etc. Stage for four years running, and it’s easy to see why.  Down-home funny and very talented, this music just sounds like America.  They also told more jokes about banjos then I thought existed. 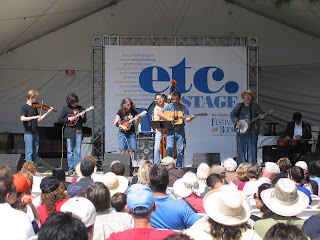 As is tradition, Awaken, the A Capella group at UCLA, closed out the day.  These are talented singers doing pop songs without any instrumental backing – you know, like you’d expect from an A Capella group. 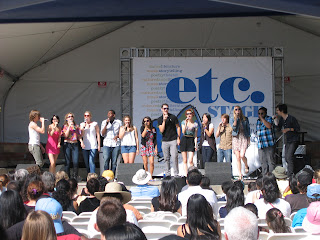 Last, but not least, I got a shot of the crowd before they bailed. 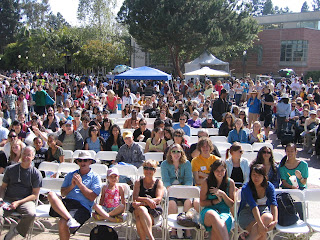 As you can see, it was a full house, and we had that all weekend!  It was a great year and I can’t wait for next year!

Today’s picture is me with the UCLA Bruin Bear that we were set up across from: 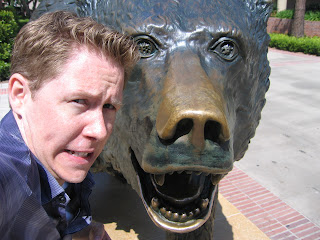