So I woke up today to hear that Corey Haim died.  I was surprised, a little.  Last I heard he was cleaning up his act so that he could work again, but that isn’t what happened.  I would have moved on without talking about it except that through the rest of the morning Facebook started to blow up with commentary on his death.  Some reflective, most that he was a ‘major crush,’ but there were people that just seemed to forget that he was a person.  It’s easy to judge people on their life choices (lord knows I have), but I know enough people who have/are suffering from addiction and, even though it’s a really bad choice that leads you there, that doesn’t make them bad people. I just think it’s important to remember that.

But enough of that.

Today continued what has been an excessively busy week.  Agent talks, contract talks, etc… Oh and teaching.  It’s been crazy great and SO close to all paying off.  Can’t wait for that.

Today’s picture is of a laughing Buddha in one of the offices I was at: 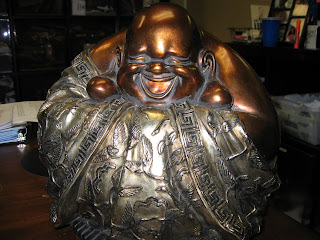