Ah, Valentine’s Day!  That Hallmark holiday celebrated by many and dreaded by many more.  For the last week Facebook has been inundated with updates that range from pithy and witty to sad and pathetic all over a day that is really supposed to be about love – and for the more cynical cards, candy and expensive dinners.  I had started writing about things like S.A.D. (Single Awareness Day), and Valentine’s Day activities that the singles were talking about, but as I read it back, realizing that I’m coming from a place where I’m in a long term committed relationship, it sounded condescending and awful so I deleted all that and instead just told you that I’m a condescending ass.

Let’s take a new tack, shall we?  Rene and I don’t usually celebrate V-Day.  The last three years we have been struggling more than we have been thriving, but the winds of fortune are starting to turn and this year it seemed appropriate to celebrate a bit of old fashioned Valentine’s Day tradition, we gave each other cards and went to dinner – but she didn’t know that!  I had been keeping dinner a surprise for the last week.  Rene had been dying to figure out what her “Valentine’s Day Surprise” was going to be.  At night she would try and trick me, just as I was falling asleep, to revealing what we were doing.  She performed internet searches and held conferences with her friends and confidants.  She hired  research teams at top think tanks around the globe and got ex-KGB to follow me around… OK, maybe not so much with the last part, but she was definitely determined to uncover the truth.

However, no matter how determined she was, I wasn’t going to let her know.  She actually guessed both the activity and destination the first day that she started guessing, but I just told her “no” and let her keep tracking things down.  I’m a stinker.  She started to get a little upset about the whole thing and my resolve almost caved – but I held strong and eventually, as we pulled up to the restaurant, she knew that we were dining at Capone’s Cucina!  Capone’s is a wonderful southern Italian restaurant with great food and a GREAT wine list.  The owner, Dino, treats every customer like guests in his own kitchen, and still cooks much of the food himself, even with a small platoon of chefs at his disposal.  Every trip to Capone’s reminds us that we need to go back sooner than later.  We had a very romantic night.  We dressed up nice, had a bottle of wine and great food.  There was a singer there as well and she crooned at the diners and told stories about weddings she has sung at and wove in conversation with the audience.  It was a lounge act in the best possible sense of the phrase.

Today’s picture is of us at the end of dinner. 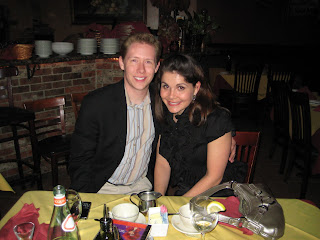