Today was a an awful day to do business.  By noon it was clear that just about nothing would get done, and seeing as I’m run down from going nonstop the last few weeks, I decided to go with it and catch up on a few of the best picture nominated movies.  Today was Up In the Air and Avatar IMAX 3D.

Today’s picture is of the ticket stubs from today. 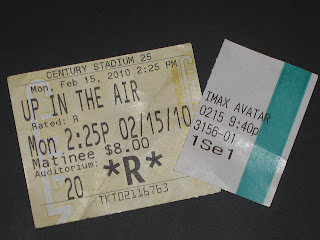 First up, Up In the Air.  I really enjoyed this movie.  Jason Reitman is easily one of my favorite contemporary directors.  He builds visual stories where the images he chooses to show you could almost be watched on mute and still convey the emotional resonance that they achieve with sound.  I felt that his use of subtle symbolism, and even the not-so-subtle symbolism, just lifted me up like a leaf on the wind and carried me through the story.  I felt surrendered to the waves of the film and, because of that surrender, I really connected with the changes that George Cloony’s character was going through.  There is a powerful message on the damage to the economy in this film and at points I think it overwhelms the more subtle message of family and what that means to us individually and how it manifests itself in different lives.  There is a running metaphor in the film about emptying a backpack and  by emptying that backpack we relieve ourselves of responsibility.  By the Cloony character’s definition this is freedom but I saw it as just a “backpack” filled with the unseen burden of solitude.  I don’t believe that there is anyway to avoid emotional baggage.  Trying to hide from it can create it in just the same way that a horrible break-up can.

The fact that so much can be read into this film, not just the items that I’m bringing up, makes this a true artistic statement to me.  I feel like this one is going to be around for a while.  If you enjoy a really well made film go see it.

Then we make the trip to see Avatar IMAX 3D.  I’m including the “IMAX 3D” part because I think it is important to identify how this particular movie is seen and I was not interested in seeing it any other way.  Does that mean that I fell into some kind of marketing trap?  Perhaps, but I’m willing to let that slide.  On a meta-note the movie theater business and industry is changing and is going to continue to change for a while.  They will be looking for ways to keep movies profitable so that they can remain a viable business and thereby justify the billions and billions of dollars that are spent on them annually.  Make no mistake, the movie business is in just as much trouble as the music industry, but we have better PR people and are trying to learn from RIAA’s mistakes.  The advent of digital everything is great for consumption but horrible for business.  Before this decade I could never fathom how the “Star Trek” future of “no money” could ever exist, but as I see the proliferation of free web services that are better then what you can pay for and the quality of the free content available online my ideas on a “free society” (at least where money is concerned)  have begun to change.  Naturally the big ships of industry are slow to turn and sometimes they over compensate.  Right now 3D entertainment is THE thing.  It’s everywhere and I make the prediction now that 3D home entertainment will still be pushed on the population for the next three years in ridiculous ways.  They will be 3Ding everything and will probably try to convince you to buy a pair of glasses that make your real life 3D.

I hope you’re laughing at that.

If by chance you aren’t laughing and you just took that advice seriously and you are head of a major corporation who will try and build the “Real Life 3D Glasses” either send me a check or shoot yourself.  It a “six of one, half-a-dozen of the other” situation to me.  Either way don’t expect the current wave of 3D TVs and 3D versions of your favorite old movies to be the last or to go away anytime soon.

That being said, I really think James Cameron got it right.  He built the kind of simple, fun, visually exciting movie that is going to sustain Hollywood for the foreseeable future.  He made a movie, and the technology to create the movie, that cannot be recreated in the home theater space – you need to see this film in the theaters.  It’s what it’s designed for and it’s the only way that I feel the movie will make a strong emotional impact.  I can tell you in my personal experience that, even at it’s almost three hour length, this movie was compressed storytelling in the tradition of a Silver Age comic book.  It gives you all the basic information that you need up front, reminds you with a recap right before specific events happen an never lets you bog down too much forming a separate opinion.  This is not thinking man’s cinema, but that does not make it bad cinema.  What it does make it is easily digestible, understandable and relate-able at a very base level that is clear when you look at the number of tickets sold all around the world.

Transformers 2 captured something, I still don’t know what it was since I have not seen it, but I’m one of the few.  By all rights it was not a good movie.  No one that I asked could look me in the eyes and say that Transformers 2 was in any way, shape or form a good movie, but it was successful and I think the reason for that is because it plugged into a very basic need that higher brow critics and movie goers aren’t willing to see just yet.  Fourteen year old boys get it.  They really do and even though they can’t explain it to you there’s a reason that so much of today’s entertainment is written for and by that fourteen year old male mentality.  Lord knows that why I’ve been making the movies that I’ve been making and it’s why Transformers 2 was a success in spite of a lack of quality and why Avatar has become the biggest movie of all time with it’s simple, unremarkable story.  Hell, Cameron even started writing it at fourteen!  You don’t need to read too much into it.  We all want to be “the hero,” “the prom king/queen,” “the chosen one.”  Just look back on all of the greatest successes in the world of film and you’ll see all of it is the same.  Whether male or female, little boy or little girl, we want to be that someone special.  James Cameron took that, placed it inside some very exciting advanced special effects and made a film that emotionally effects people – whether you love it or hate it – and I can’t wait to see how this is going to effect Iron Man 2.

It worked, I get it and, even though I probably won’t be seeing it again, I really enjoyed the movie.  What did you think, pop it in the comments.