Today’s post has nothing to do with me and is all about Rene and her talents.  Rene has quite a few of them and if you come see “Jake’s Women” you can see one in particular, a talent that she has managed to downplay for as long as I’ve known her: she’s really funny!

Now don’t get me wrong, it isn’t like the girl is a bore or dull or can’t tell a joke in casual conversation.  Rene has told many amusing stories and her humor is part of what makes her a good conversationalist, but being funny on stage, over and over again, on command is hard and if you want to be humbled I suggest taking a shot at an open mic night at your local comedy club ‘cuz it ain’t easy.  Rene has made a point of telling me for years that she is not comfortable doing improv or being funny.  She has been adamant about it.  I took her at her word and never really thought much else of it.

My eyes started to open when I saw her play Sheila in “Jake’s Women.”  As a boyfriend or girlfriend you are predisposed to liking whatever your significant other does, but when you are completely blown away… Rene does a STELLAR job with the role and in my humble opinion she alone is worth the price of admission.  Her combination of accent and body language is hysterical and you should all see it.  And then she mentioned that she and the other women of “Jake’s Women” were invited to participate in an improv show to benefit the Laura’s House women’s charity.  It took some convincing to get to to say yes, and even after she said yes she was ready to drop out, but she did it and she was so impressive!!!!  I had no idea that my girl was an improv queen!  She’s not sure if it’s something she wants to do again, but I hope she does.

Today’s picture is from the show tonight: 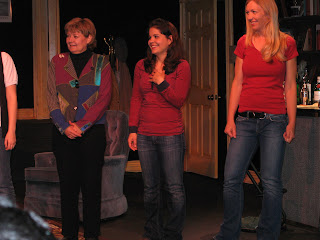