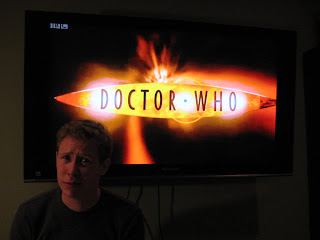 Keeping in line with yesterday’s post, my geekness knows no bounds, and today I witnessed a sad thing in the world of geekdom – the end of David Tennant’s run as The Doctor on Doctor Who.  It is also the end of Russell T. Davies run as Executive Producer on the show.  It is truly an end of an era.

I have been a Whosian since I was a small child and watched re-runs of Tom Baker episodes on PBS with my dad.  Even as a four year old I knew that the effects were cheesy and the acting left the scenery chewed to bits, but there has always been a magic with the show, as any fan can tell you and there are plenty of them the whole world over.  Imagine the best parts of Star Trek and Star Wars all combined and then shot on a shoe string budget – voila! That’s Doctor Who!

The series ended back in 1989 in less than stellar style.  Sylvester McCoy, the 7th Doctor, was another favorite of mine, but there were limited episodes and the writing near the end of the series was ungood.  The 7th Doctor reappeared in the failed US TV movie backdoor pilot back in 1995, but it wasn’t until 2005 that we got a real “regeneration” of the series (that’s an inside joke).  Russell T. Davies brought back the magic of what I and so many others like me loved about the series from childhood, but added today’s modern special F/X capabilities that helped raise the production level of the show.  That, combined with his reverence for over 40 years of show history, lead to a re-launch that Who fans both new and old could get attached to, and we did!  For four seasons we watched as the Doctor, in two different forms, raced through time and space saving the innocent and doing his best as the last Time Lord in the universe.  With Davies at the wheel Who fans could watch with confidence that their hero would be in good hands.

New Years Day that promise ended.  Now we have a new Doctor – The 11th Doctor Matt Smith – and a new EP, Steven Moffat, at the helm guiding the series.  Part of me is really excited for a new direction for the show, but another part of me is terrified that some of the magic that has kept the show so good may fall away.  Thus my concerned look in the picture.  I guess we’ll find out in the spring.

BTW: If some of that was “greek” to you, and I’m sure to some of you it was, please check out DOCTOR WHO ON WIKIPEDIA.  It’s a great primer on all things Who.