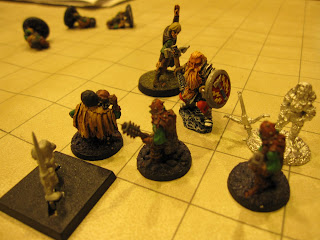 Well not me, per se, but my character, Hyrak Durgog, a dwarf cleric of Moradin – The God of Mountains and Stone!

Yes, my dear readers, I am a big old geek, nerd, goober, call me what you will but I am confident enough in myself that I don’t mind shouting out to the world that I am a D&D player and proud.  I’ve been playing for about two decades and in that time I’ve fought creatures great and small, monsters, demons, elves, dwarves, orcs and even the occasional human.  It’s a good time around a table with friends and, despite the stereotype, does not require a dark basement to play in nor is it evil.

Side Note – Geek Cred: So you know I know what I’m talking about.

Our current campaign, where we are trying to save the countryside from an army or orcs dedicated to overtaking all of the land, has been going for a few years but we have only played very sporadically.  I play with two of my childhood friends, Jeff and Scott, and their wives, Ami and Liz.  Rene avoided drinking the Kool-Aid.  The boys and I have developed a very specific (read: loose) play style that apparently doesn’t mesh well with regular D&D players. Or maybe it would, we’ve rarely ever played outside our little circle.   We have always used the game as a reason to get together and catch-up, not just to play, which can lead to long off-topic conversations right in the middle of battling all manner of horrible creatures.  While we play very diligently, we don’t play very seriously.  Tonight was no different, but we did get ourselves into a bit of a situation.

It takes months to manage everyone’s schedules to  point where we can all be in the same room at the same time so each time we actually sit down to play we truly come from a place where we want to get as far through the adventure as we can.  But as all well laid battle plans, this intention never survives contact with “the enemy.”  The enemy here being side conversations and, particularly in my case tonight, over confidence.  Taking so long to plan a session means that when we are around the table we actually want to catch up so we wander into the inn, then we talk about Jeff’s tour around the mid-west/east coast.  We fight some cobalds and then talk about Scott & Liz’s baby.  Then the baby cries so Scott or Liz go to see her, Jeff and I hop on our Blackberry’s to see what’s going on in the world and like that for five or six hours.  While it may sound boring, we actually enjoy ourselves quite a bit – especially when it comes to harrowing feats of combat!

Scott has a reputation among D&D players as a cruel, cruel Dungeon Master (that’s the guy who sets up the game and controls all of the monsters and civilians who aren’t the players at the table).  I’ve watched as my characters have been laid low by some vile plan of his only to have my sorrow met by the cackle of his evil laughter.  This game was no different.  To get to the point we were investigating an underground city when we were attacked by by a small group of evil dwarf-like things that resemble Gollum from “The Lord of the Rings.”  We beat those, but the fight got the attention of a group of heavily armed and armored orcs, the same one’s we’re trying to save the countryside from!  So, naturally, we attacked them.

This was not the smartest of moves.

Not the dumbest either, but definitely not smart.  We rushed in, as did the orcs, and, at first we were actually doing pretty well!  Spells were cast, swords hit their mark, all the things you want to see happen, but just as easily as things can go well they can turn against you.  And boy-howdy did things turn.  First Jeff’s guy was beaten near death, so he took off running only to be followed by the enemy.  Then Liz’s character went into hiding to avoid getting herself killed.  So Ami and I were all by ourselves facing over a dozen angry orcs.  It went about as well as you can expect. 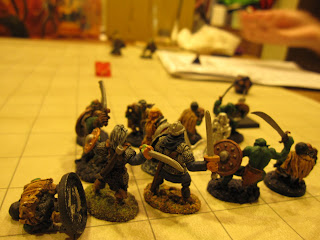 So there we were surrounded by a green wall of death, swords crashing against shields, my dwarf’s warhammer crushing skulls, and then… nothing!  I was slashed at and brought down!  Ami fought on valiantly but was brought down as well.  I paraphrase Jeff when I say, “You haven’t lived until you’ve died in a Scott campaign.”  Or something like that, it’s hard to remember and I like my phrasing better.
At that point I had to leave, I had to teach early in the morning in San Diego, so I left my near dead body on the battlefield as my companions tried to figure out what to do.
Rene just told me that I’ve gone into too much detail on a story that no one cares about.  It is entirely possible that you don’t and the big part of the story is told so I’ll wrap up the rest quick: I didn’t “totally” die.  Ami did.  Liz and Jeff saved us and resurrected Ami.  And that’s it.
Yes, it’s true, I used “death” in the title to trick you into reading my blog.  *EVIL LOL’s!!!!!!!!!*
See you tomorrow!