After very little sleep the night before, we were up bright and early to have breakfast with a representative from Fotokem.  Big ups and props to to Ray Morfino.  You are a gentleman and a scholar.  Then it was right back to work, well if catching a movie premier and a panel on film distribution can really be considered work.

Actually, the panel totally counts, but I’ll get to that in a second.

We saw the premier of “The Imperialists Are Still Alive!” which was good, but best described by Rene as “a very ‘Sundance’ movie.”  Then we raced to a panel on distribution.  It was supposed to be a panel that would shed new light on how independent producers can get distributed, but there was very little new information and it still goes to show that the best place to make money in the movie business is on the distribution side, but I’m letting my bitterness show too much.

After the panel we got some food and Rene sat in a seat where we had seen Parker Posey sitting a few hours earlier.  She tried to suck up as much “Indie Queen” energy as she could before we went to the Sundance Connectors Party.

Those few hours are still a bit of a blur for me.  I only know it was over because by 6:30pm we were back in the car and headed for home.  Which is where our picture of the day comes from – Rene’s cup of coffee had been sitting in the car over night and it had frozen to the bottom.  It was a coffee-cicle! 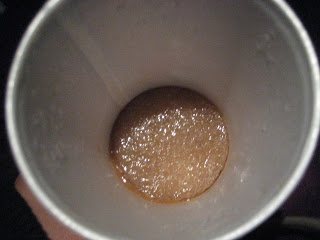