Today was a hectic, hectic day!  After yesterday’s rush to get everything done, I woke up early to finish all the stuff that I didn’t do last night.  Actually, that went pretty quick, then I went to work, then left to get Rene.

That’s where things went a bit off the rails.

I had to pick up mail, Rene was a bit behind, we left later than expected, there were two accidents and two detours – but three states later, after a quick bite at Quigley’s in Barstow (really liked that place, found out too late they are known for their deserts), we rolled into Cedar City Utah at about 3am local time.  So I’m going to bed and hope you enjoy today’s photo: me eating a California Burger at Quigley’s. 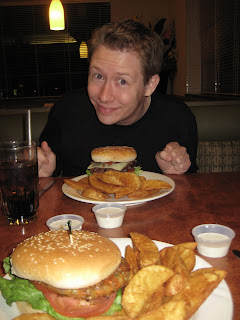