Thursday nights are my favorite class.  It’s my adult class and it never ceases to be exciting.  The ages range from 13 – 63 years old but it doesn’t seem to matter – there is great work coming out of this class.  There is a bit of a double edge to this sword, some of the students are less experienced but they are adults – like, grown up people – so they think they know stuff that they really don’t know.  There’s usually at least one person per session who thinks that they are going to teach the class.  It’s the most obnoxious two weeks of each session.  I’m always polite the first week and try to very plainly state that it is good that they have an opinion but that when it comes to technique I choose to do how I do things very carefully depending on the student.  Occasionally this works.  Usually it takes one more class where I ask them to defend their opinion that they start to see where I’m coming from.  I don’t need to be right, I just need them to be open to the ideas that I’m trying to give them.

Anyway, the current crop is very promising.  I’ve got a couple of vets in the class who are actually leading the rookies and sometimes that means that a 14 year old is giving insights – actual performance insights – to a 23 year old.  It’s so inspiring!  And the new students really have a lot of raw talent.  The two hours of class just speed by.  I can’t wait until next week!

Today after class I was doing a casting gig for the owner of the school.  She is also producing shows right now and she needed some talent.  She casts out of the student pool when possible, but today we needed women 30-40 something, and we just don’t have any of those right now.  The auditions were tonight and everyone did so well that instead of just casting one person it looks like we’re going to cast two!  It was just a good night to see talent.

Today’s picture is me closing up for the night. 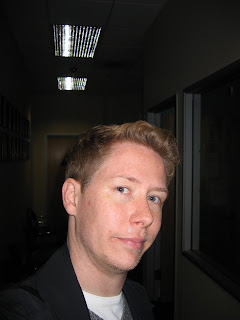