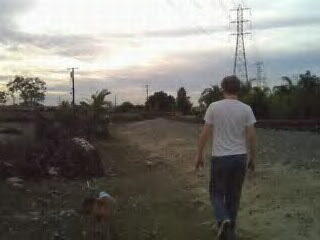 Today is the first day of Rene, Dean and my new Project 365 – 2010!  As you saw in the introduction post we are doing things a bit differently.  Rene has added a theme element to her project and since Rene and I spend so much time together I will be doing my best to stick to these themes.

The theme for January is: Doing New Things!

Everyday we are going to try and do new things.  Technically the first new thing I did this year was make a drink based on a Kahlua mud slide with Buttershots and more Kahlua – but that’s not what’s getting credit for today(although it is REALLY good!).  Instead we will talk about the new route we took Frankie on for his walk!

Frankie is a pitbull and needs a lot of exercise to keep him a happy little man.  Rene takes him on regular walks and I try to join them as often as I can.  Today was one of those days.  There are lots of little routes that are available to the dog walker in the neighborhood, and I thought Rene had tried them all, but I was wrong.  Train tracks run near her house and while we have traveled down one direction before she’d never gone the other way.  It was like a scene out of “Stand By Me” with Frankie in the lead and Rene and I catching up from behind.  I thought all the rocks that line the tracks, with their sharp edges and hidden glass, would keep Frankie from wanting to go down the path but he’s a clever little dog and he found a stretch of soft sand that runs along the whole track.  The only real bump in the road was the carcass of a dead bird that Frankie found.  This wouldn’t be so bad except that he decided that he should roll around in the dirt near the carcass.  Gross.  He was promptly bathed when we got home and now smells of happiness and light and all of his white fur glows with what seems like an inner light.

So that was our first “new thing”.  We also discussed going into Fuzzy Bears, a dive bar featuring “exotic girls” and pool, as a “new thing” to do since neither of us has ever seen exotic girls juxtaposed with pool tables… maybe another time.