Working in Hollywood can be as silly and vapid as you see on TV.  Only about half of the people that are here really want to do any work, most got into the business to not have to work.  This can be very frustrating, but also makes you really appreciate the people who want to work.  Regardless of who you’re working with there is a standard of “posturing” in town, making sure that you look at powerful as possible so people know that you know what you’re doing and that you are not to be messed with.

I never understood why it was so important, but it is the way of doing business.  It is so common, in fact, that when you don’t do it it completely throws people off.  I have always been a big believer that “good work will out” but, as you can tell from the fact that there is some terrible entertainment on the air, that isn’t always true.  These two things combined have made for a frustrating day.

That frustration, however, led to one of the most productive days in a long time.  Nothing can motivate like frustration, especially for me.  I don’t like being frustrated and so it makes me want to finish or complete whatever it is that is making me frustrated.  That’s what I did today, and I did it without posturing and good work did out!

And I had a two and a half hour working lunch with Rene and my friend Dempsey.  Thanks for the hook-up’s D!

The picture I had intended for today did not turn out, which is a bummer but I was trying to be “artistic” and it looked much better on the little screen of the camera and more like a gray mess on a real screen.  So I have selected today’s picture of Rene, her cousin, her cousin’s friend and I at dinner before I had to leave for Improv Shmimprov.  While not exactly representing my whole day, it does show how the day finished – and it was pretty nice. 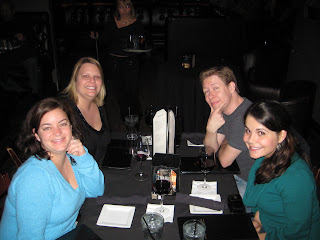