Project: Iron Man – Iron Man #14 Is The Industrialist the Environmentalist or is it Voodoo? 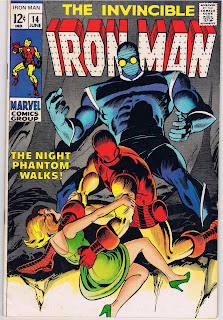 Is it environmentalism if you only want to save the environment for personal gain?

Is it spoiling the environment if you help develop the economy of a country?

Is Voodoo responsible for all of it?

These are the questions raised in Iron Man #14, but only the third is answered – place your bets now about how that turns out.

The beginning of this issue feels like a throw-back to the monster comics that Marvel and other comic book companies used to make where the monster was the star and everything is explained in narration. Here’s the first couple pages: 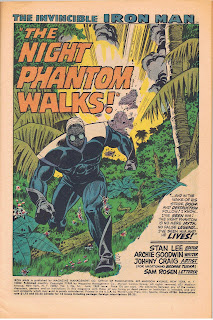 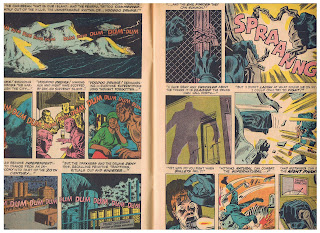 Now here’s an example of another Marvel horror book: 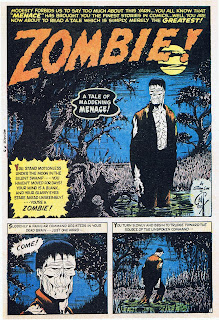 Similar, right? This book was released in 1969, many years after the height of Marvel’s horror books, but I like to think writer Archie Goodwin was nostalgic for the old days.

This is a fill-in issue between two story arcs, also called a one-and-done story, and for all the cover space the bad guy gets and how he graces the open page you’d think we’d see this guy again… but we never do.
EDIT: That’s not true! Turns out we do see him later in the mid-40’s! It’s a statement on how memorable the character is that I completely forgot about that. By the time we get to the mid 40’s you’ll probably forget as well.

Stark is visiting his facility on a small Caribbean island (no name is given) because it has been blown up by the rumored voodoo monster the Night Phantom! By no small chance it coincides with Janice Cord also being on the small unnamed island visiting a friend of her late father.  There is an author named Travis Hoyt who has made his home on the island and he’s very upset at Stark because, “[Starks’] projects and ‘progress’ are destroying [the island’s] natural beauty and primitive charm!” 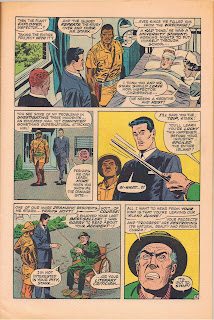 It is also an important plot point to know that Hoyt was injured in a plane crash and is confined to a wheel chair. So Tony and the police inspector go out to the work site to investigate the accident. It’s bad and Tony’s Geiger counter in his watch goes off  – the site is radioactive! Suddenly it doesn’t look like the voodoo monster is powered as much by voodoo as it is lethal radioactivity. Also, Hoyt is watching them with his telescope and apparently has really good hearing. As the inspector and Stark are getting ready to leave the voodoo drums start and they are attacked by the Night Phantom! 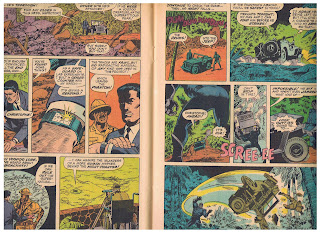 Stark wakes up to Janice. She brought him back to her father’s friend’s home – none other than Travis Hoyt! They argue and Tony leaves to find the inspector. 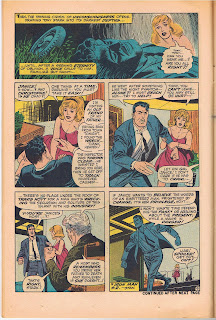 Oh and to put on the Iron Man armor. The Vario beam (that circle on his chest) can pick up the residual radioactivity so he uses that to find the Night Phantom and hopefully the inspector as well! Back at Hoyt’s house things get a little “rape-y”… 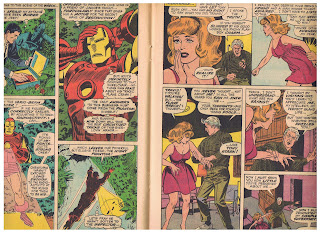 Hoyt’s not really crippled. He has a radioactive pool under his house that healed him and made him very strong, but it also scarred him horribly so he dresses up in the Night Phantom gear. 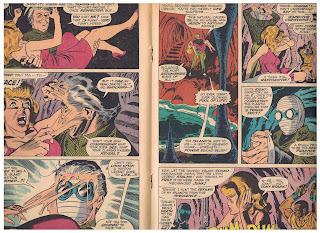 Quick real world note here, for what it’s worth. I bring it up because it just happened in a recent issue of Iron Man as well (#516) where the bad guy takes off his human disguise to reveal the super-villain mask underneath. 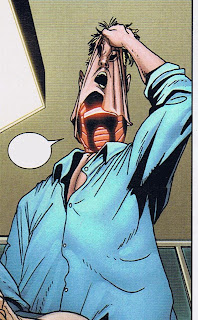 So I’m supposed to believe that you walk around all day with two masks on? All day every day? And no one notices? Every time you OPEN YOUR MOUTH there should be a problem since your other mask would be exposed!!! Hell, Spy Master there in #516 was in a romantic relationship! There was kissing and eating and stuff, how’d that work? My rational brain knows that this is a pointless rant, but I had to get it off my chest. Now I did. I feel better. Thank you.

So Iron Man follows the radioactivity to the cave where everyone else has ended up. Turns out the voodoo drums are on P.A. speakers – very loud P.A. speakers. 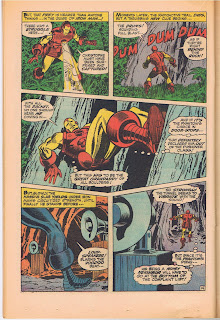 Hoyt wants to dip Janice in the pool so she can be with him, but Iron Man takes exception to that and wails on him right before reaching to pull Janice back up from the pool. 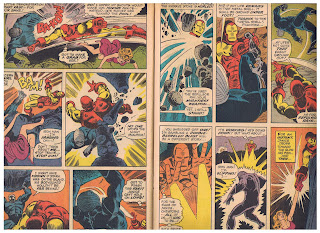 Then Hoyt jumps in the pool to power up but, low and behold, all the construction by Stark has made small cracks in the base of the pool (hence why Hoyt was all angry at him in the first place) and the voodoo drum noise from the speakers made the damage worse so Hoyt is sucked away into the Earth… and Tony and Janice jet off to have more adventures in Captain Marvel #14. 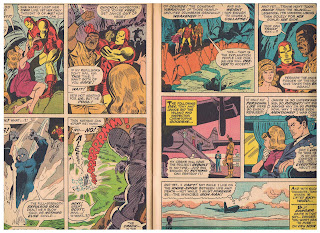 Let’s get down to the biscuits.

The thing in this story that stuck out the most to me, especially in our polarized political times, is that our bad guy, Travis Hoyt, seems to be an environmentalist – even if it’s for selfish reasons and he’s kind of elitist about the whole thing – and Tony and the inspector stand for developing industry – although to be fair it is mentioned that it is benefiting the people of the small unnamed island. There’s even a heavy handed mention that the security guard who was attacked at the very beginning of the issue was just a kid working his way through school.

I got a good dose of “industry as job creators” when reading this and found it unsettling that a political issue that is so prominent today existed in some form enough to make it into a comic book back in the late 60’s. To be fair, and not to try and make too big a deal out of this, Stark factories, as you’ll see in coming issues, are know for how environmentally sound they are and, really, Hoyt was a douche-nozzle, but industry versus environment is a long standing dichotomy none the less.

If only all “job creators” were as responsible and well intention-ed as a fictional Tony Stark.