So before I even begin I would like you to look at the cover: 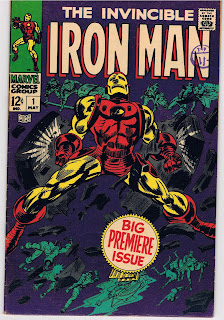 You purple circle stamp on the “N” on the cover? Fun story behind why I bought this issue and how it’s easy to confuse a kid who thought he knew everything about his favorite character’s premiere issue but turned out to know just enough to get himself in trouble.

Well, trouble in a relative sense.

OK, so not any actual “trouble’ but we can go with “mild embarrassment.”

I remember very clearly the comic convention where I finally found, and more importantly had saved up the money to buy, Iron Man #1. Well, I remember except for the location – it was definitely a hotel ball room, can’t remember if it was L.A. or Anaheim, but that’s not the important part.

The dealer who was selling it was right next to the entry door. He had what comic collectors would recognize as a “rare wall” where they put all the number one’s and first appearance issues. He had multiple copies of Iron Man #1 ranging in price and condition. Two caught my eye right away – one at $250 and another that was $350. However, because it was so early in the show, I didn’t want to blow my cash right away. And it was a big show so I figured there’d be other dealers carrying the issue.

Comic conventions for my dad and I were really cool bonding moments. We’d walk the aisles, check out artists and new books and he started teaching me the way to negotiate and bargain – ideas that were completely foreign to me. I have several items in my Iron Man collections that he managed to talk down to a fair price, and I still flinch to myself when I remember how I screwed up a negotiation for a Wolverine Secret Wars action figure almost twenty-five years ago ($40 bucks! Gah! I shoulda’ walked away!).

The Shrine shows were my favorite! ComiCon is great and all, but nothing beats a good old fashion comic book and collectors show like the one’s they held at The Shrine auditorium (They still put on this show! INFO HERE). It was $10 to get in and it was an easy way to burn a Sunday. I bought so much Yoda memorabilia there – just ridiculous. I still remember that there was a sculptor one month that did an Iron Man statue. The armor didn’t match any that I was familiar with, it was his own take on the current armor of the time, so I held off buying it. I decided after we got home that it was cool and I did want it after all. We went back the next month and he wasn’t there. Dad told me that sometimes, especially for one of a kind items, you really can’t wait. Lesson learned.

Back to the story…

So we waited until the end of the day to go back to the original dealer, no other dealers at the con had a decent copy of Iron Man #1 at a better price and, as my dad had taught me, people are more likely to wheel and deal when it’s the end of the day.

We went up and I asked to see the two different versions of the issue that had caught my eye in the first place. The $250 one was a little worse off for wear, but still in what would be considered VG or very good condition. The $350 was definitely better overall, practically NM or near mint condition, and there was an extra label on the bag that said “Marvel Value Stamp intact.” At the time I had no idea what a Marvel Value Stamp was. I thought it was that purple mark that I pointed out to you on the “N’ at the beginning of this post. Seeing that as an extra bonus I totally got that one. We talked money, I know the price came down a little but I don’t remember how much (yay for negotiation skills, boo for memory loss), I handed the man my money, bagged it up and I was the happiest little boy walking out of that convention! It was, and continues to be, the pride of my collection. Even after decades of storage it is still in marvelous, no pun intended, condition.

Fast forward, decades later, I find out what a Marvel Value stamp actually is! You can get a full explanation HERE but the basic story is that they were small pin-ups of characters, the size of stamps, that you’d cut-out and collect from all the different issues of Marvel comics – in the mid 70’s! there is no Marvel Value Stamp in this issue! This came out a good five or six years before that promotion! So as an adult I’m thinking to myself, “That bastard screwed over a kid!” Really, using my rational brain, $350 was a very fair price for the issue at the time given it’s condition so even if I had paid full price I couldn’t be too unhappy…

…but then you look at the purple stamp that is there on the “N” and it’s just a constant reminder that part of my decision making process was based on my misunderstanding of what a “Value Stamp” was. So embarrassing! I have no idea what that mark even is. I think it might be a postage mark, but I don’t know for sure. If you do please let me know in the comments.

The issue itself is very fitting for the times. It picks up right where the last issue of Tales of Suspense left off (as retold in Iron Man and Sub-Mariner #1 see last post) with shell-head sucked via vortex beam into the A.I.M. submarine. 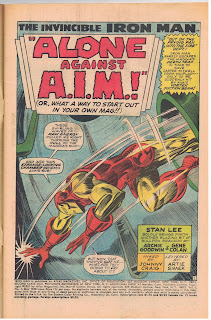 This is the end of the story and it wraps up everything nicely – Iron Man wins the day, Jasper Sitwell is saved and we are re-introduced to Whitney Frost (originally introduced in ToS #98 – an issue I do not own so this was my first exposure to her). Whitney becomes very important later so stick her name in the back of your mind. 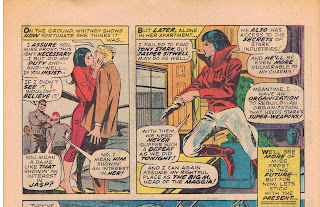 Some of the cool images of in this issue come from the renderings in and of the A.I.M. island base. Not only are the yellow beekeeper suits eye catching, but apparently in the late 60’s you needed to put a monogram on everything, even the floor! 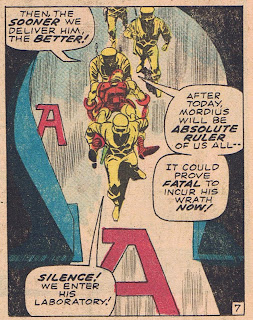 This is my favorite: 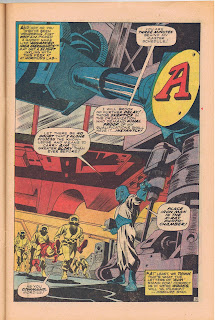 Seriously, that is a highly stylized “A” on that machine arm!

The big-bad in this issue is a one-off named Mordius – a pre-cursor to the menacing M.O.D.O.K. who we’ll meet later. His face is deformed, although there is no explanation as to why, and he speaks just like the kind of super-villain you’d make fun of. He’s so corny, in fact, when Iron Man decides to kiss some ass he makes mention of it: 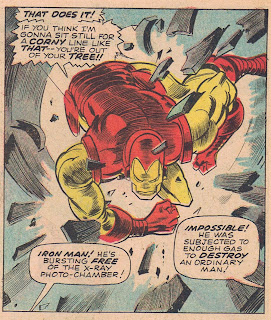 Oh, and I should probably mention that he invented what is essentially a very powerful 3D scanner and printer that he uses to make copies of the Iron Man armor. What he wasn’t counting on was the refractory coating on the armor that screws up the x-rays and makes it so that the armor copies don’t work right! 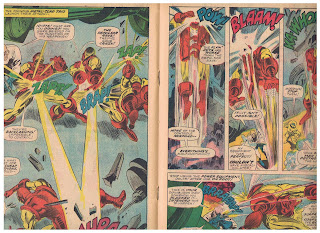 The story ends with the island base exploding, Mordius is never heard from again, and we are promised more action with “The Demolisher!” 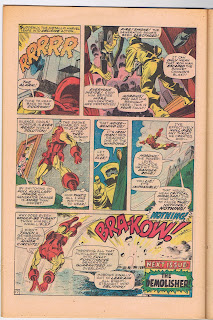 There’s also a bonus story in the back, a three page re-telling of Iron Man’s origin. There wasn’t a collector’s market at the time. People couldn’t easily get the back issues so re-prints like this were common. When we get to the Giant-Sized issues and Annuals you’ll see more stuff like this. 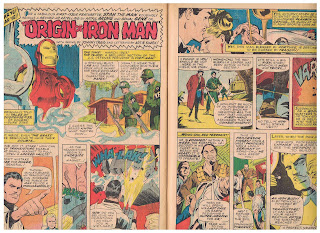 Now I kinda’ wanna’ take my dad to the next Shrine show.