Today was a little bit of crazy and I don’t want to jinx it so I’m just going to tackle one topic – I got a new phone!  And so did my mom, in fact it’s the reason I got my new phone.  See, she left her phone – which was my old phone from about five years back – in Indiana where she was visiting family.  When she came home she told me she wanted a new phone that had a real keypad so that she could text.

Yes, my mother is now a texter.

The nice thing is that I keep my phones forever sh she was already due for an upgrade and it turns out I was too!

My mom ended up getting an LG with a slide keypad that has a name I forgot and she was as happy as a fourteen year old girl at a Twilight screening.

I got the new Blackberry Bold!  I’ve been patiently waiting for this phone.  It’s sleek, smaller than my old Blackberry, has better software and the user interface, while technically the same, is easier for me to navigate.  Also it has the new optical track pad instead of the often troublesome track ball.

Oh, and I entered the 21st century and have a camera on this phone!  Rene, Dean and anyone else who ever noticed that my phone didn’t have a camera have been mildly hassling me to get one and now I do!  This is the first picture I took: 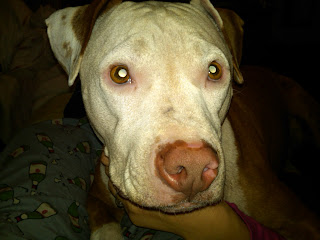