Today I went with Rene, Dean and Zeke to the /Film meet-up at Jerry’s Famous Deli on Ventura Blvd. in Los Angeles. It was very exciting! In addition to being in and making film and television I’m a big fan as well. Something that is often pointed out when I’m with people from other industries is that filmmakers are filmmakers through and through. When we’re on the job we’re doing film and when we’re off the job we’re talking or watching film. It becomes a major component in our lives. This fact was illustrated during a networking mixer when one of the leaders asked all of us filmmakers to describe what we like to do that isn’t film related and all of us – literally all 20 or so of us – looked at each other slack jawed and really had to think about it. To be clear it isn’t that we don’t do other things it’s just that it takes so much time and dedication to actually make a career work in film/T.V. that there isn’t a lot of time left for much else.

Part of how I like to spend my time when I’m not making business proposals or shooting things is by listening to podcasts about my favorite geeky things and one of my favorites is the /Filmcast. I’ve mentioned it before in my favorite podcast blog (along with a few others that I think are worth checking out) and was very happy that Dave Chen from the /Filmcast actually commented on it! On a tangential note, /Film also produces the Tobolowsky Files podcast that features stories told by character actor Stephen Tobolowsky – another great podcast and if you like stories, and I assume you do, this is absolutely worth your time. All of these things came together at the /Film meet-up!

Peter Sciretta and Dave Chen were there as well as Stephen Tobolowsky and his wife Anne, Dan Tractenberg of Totally Rad Show Fame and DC from Derrek Comedy. Everyone was very nice and it was was really nice to talk to them about the sites, shows and movies in general. Besides the headliners, we got a chance to chat with some cool movie/pop culture lovers. It was a great night all the way around.

Today’s picture is of Rene, Stephen Tobolowsky, Anne, Dave Chen and myself at the bowling lanes: 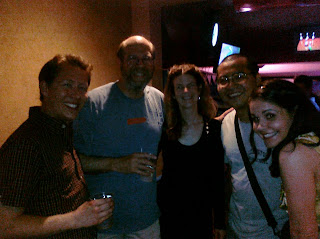 And as a special bonus here is a video of the night where I start by relieving my beer of a slice of fruit: