Let me start this off by saying that this post is NOT an Iron Man 2 review.  It’s not.  I’m way too much of a fan, and I’ve only seen the movie once and it was the midnight showing so it is impossible for me to look at the movie as anything other than, “oh-my-god-iron-man-is-the-most-awesome-ever!!!!!111!!11!!!!!”  That being said this will be a discussion about the experience of going to see the midnight screening of Iron Man 2.

It was 9:15pm and I was already late.  Dean had been at the theater since 7pm waiting in line and I was teaching from 7-9 (8:45, really, since I took away the 15 minute break we usually take in the middle of class).  I was very grateful that he saved me a seat and I did my best to stumble to it without making too much of a fuss for the other viewers.  Seeing the first movie again, with digital projection, in a room full of happy fans was a great way to start off the night.  Even though media is changing over to on-demand home presentations there is something about the theater going experience that can’t be replicated at home, especially when it’s a movie that you really like!  I was decked out in my classic Iron Man t-shirt and definitely ready to get my geek on.

There was a trivia contest between movies.  It started as I was in the lobby getting a hot dog, popcorn and a Cherry Coke.   I came back and Dean was like, “Dude, they’re giving away posters.”  And I was like, “Awesome!  I got this.”

Question #1:  How many years was the first Iron Man movie in development?  Tough question.  I remember the first articles coming out in the early 90’s, I guessed ’92 so I said, “18 years!”

Question #2:  What was the name of the terrorist organization that kidnaps Tony Stark in the first movie.  I got my hand up first and yelled,”The Ten Rings!”

The crowd may have teased me for my geek-aptitude, but in the end I walked away with a free poster.  Which happens to be today’s picture: 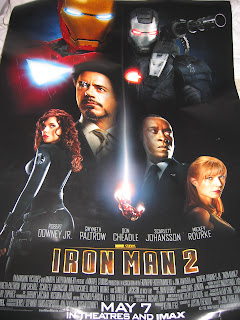 Then the beach balls started flying!  I don’t know that I’ll ever understand the attraction of beach balls in a large crowd, but the mob mentality can be addicting.  I was trying to eat a hot dog as the ball bounced around the room and there were more than a couple times when the ball just landed right in front of me.  I couldn’t reach it so the guy next to me had to get up to toss it back around.  The crowd boo’d but then a guy one row ahead of me stood up and said, “He’s trying to eat a hot dog!  Give him a break!”  Thus, my name for the rest of the night was “Hot Dog.”  The ball would flop down behind me, “It’s by Hot Dog!”  The ball fell next to me, “Ahhh, Hot Dog!”  It was the most attention I’ve ever received while eating a hot dog.

Then Iron Man 2 started!  I’ve read the reviews.  I’ve seen your complaints.  You are all wrong!  This movies was awesome and funny and awesome!  And I think I had a full geek-gasm when I saw the after credit sequence.  After I’ve seen it a second time I might be able to give a more impartial review, but for right now…