Before we begin a video presentation:

With Iron Man 2 on the way I’m starting to get Iron Fever!  I’m planning a midnight movie trip and am trying to see if there’s a way to do the Iron Man/Iron Man 2 double feature offered by AMC.  My fanaticism knows few bounds.  It knows some, but not a lot of them.  Ever since 1983, issue 173, I have loved Iron Man.  I know that part of what drew me to the character is the design, with the color combo of red and gold, but it is odd that the story in issue 173 managed to capture my attention.  Written by Denny O’Neil, famous for his run on Green Lantern Green Arrow which was heavy with social commentary, he took Tony Stark from arrogant hero to hopeless drunk… for a second time.

Iron Man fans will know the Demon in a Bottle storyline, a seminal tale that is “must” reading for the character, by Bob Layton and David Michelinie with art by a personal favorite of mine, John Romita, Jr.  It tells the story of Tony Stark’s fall into alcoholism.  After a few issues, and the help of Bethany Cabe with a few well plotted montages, he was better and back to being a hero.  The Stane Saga was Tony’s major relapse and I found this explanation of the story on ToonZone.com:

Underneath the strong armor of Iron Man inhabits an all-too fragile man. For all his wealth, handsome looks, and genius, Tony Stark is an alcoholic. At one point, the power of drink threw him into self-destruction. Fortunately Tony stopped drinking.
But there is no cure for Alcoholics. Sobriety is a life-long struggle.
Obadiah Stane knows that. A chess master, he attacks Tony emotionally and physically. He kidnaps his friends, attacks his business, and nearly pummels his armored ‘bodyguard’ with his powerful Chessmen. Pushed to the edge, Tony finds solace in a beautiful woman. But then Stane reveals his Queen, sending Tony to despair and liquor. Plunging deeper into booze, he fails to care as he loses his business, his fortune, his dignity. Even the mantle of Iron Man is taken from him, by his best friend!

The second ‘alcoholism’ saga, I thought this was a better story than the Micheline-Layton ‘Demon in the Bottle.’ There, Tony just goes drunk for one issue and than everything’s fine next issue. This storyline is one slow development. A prototype for the Post-Crisis Luthor, Obadiah Stane ruthlessly takes down Stark, hits him hard, flaunts his abilities and takes almost everything away from him. And poor Tony goes from one embarrassment to another (fighting Machine Man under the influence, attacking a baddie sloshed and in his underwear, etc.). It is also Tony’s last adventure in his classic armor, setting up Jim Rhodes as the second Iron Man (and eventually War Machine). A rather underrated story.

This issue is the middle of the story and the Iron Man armor is barely in it.  Tony Stark is a royal mess and gives up half way through.  None of the characters are freshly introduced, you’re expected to know who they are, and to top it all off when Stane’s men come to find Tony, drunk in an alley and being assaulted by gang members, one of Stane’s men shoots a gang member through the hand.  It was the most provocative thing I had ever seen and the image from that panel fascinated me for days.  But in the end Luke McDonnell’s version of the Iron Man armor stuck with me and, to this day, is one of my favorite versions of the classic armor.

A few years later Iron Man 173 became the first issue in my nearly complete Iron Man comic book collection (I gave up when “young Tony” showed up and again right around 2000).  You might think that the picture today would be of that issue from my collection, and you’d be right that it would be a good idea, but I didn’t have access to my long boxes and Target has a really cool Iron Man 2 toy display with a mirror that has the new armor minus the helmet so you can take a picture like this: 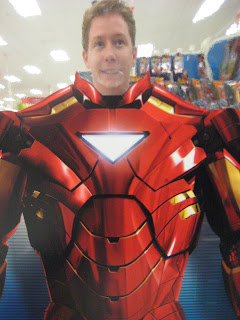 Now if you’ll excuse me I have some fanboy-ing to do.