As you’ve probably noticed these blogs are REALLY late.  I’m going to pretend that I’m writing on Thursday.

Took Frankie to the vet at 7am.  He had a growth that needs to be removed.  More on that later.

Went to baby sit my nephews.

Went to an audition.  That went really well!  Got really lucky and found a parking spot right in front of the building with over an hour left on the meter!  It was pretty cool and a VERY rare treat in L.A.  Today’s picture is of the building: 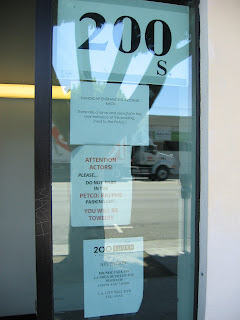 Then I went to pick up Frankie and found out that the growth was much bigger than we thought, it went deep beneath the skin and now he has a three inch scar on his neck.  I’d show a picture but it’s just too sad.  We’re calling him Frankie-stien until he heals.