I thought today was Sunday.  My brain was subtly convinced of it.  I went through my typical Saturday routine, but in my head I had a very “Sunday” feeling.  I think part of it is because I’m actually waiting on Monday, which has become a mantra on the last two films that Wiggy has made.  It feels like it takes a whole week to build up to something and then we’re “waiting for Monday” to get a response.  This can make the weekends either calming or maddening!

When it comes to weekends like this distractions are key!  Part of the distractions that Rene and I took part in was my friend Scott’s birthday celebration.  I’ve known Scott for a long time, I talked about how long in THIS post.  We almost (this close) totally screwed up by scheduling a dinner party for the same night.  I blame the calendar integration between Facebook and Google Calendar for the failure of the event making it to my personal calendar… but I should really take the responsibility of not paying much attention to FB events.  As a side note and personal rant I am not a fan of the “create an event and have people “attend” when it’s a cause.  I feel like if it is a cause it should have a fan page.  Event pages are for, you know, events where I’m supposed to show up to something at a place.  My in-box is always full of that crap and it’s always something stupid i.e., “I Love Ice Cream Day!  Attending this events means you love ice cream!”  Really?  I’m sure somewhere there’s a fan page for ice cream, do we really need to just pick a single day or, heaven forbid, a whole week to show that we like ice cream?  And if you’re going to say you love ice cream then shouldn’t there be an actual meet-up to actually EAT ice cream?!?!?  It’s madness!

5 points to the first comment that says, “It’s Sparta.”

Anyhow, we went to Scott’s birthday and had fondue, cupcakes and a monster veggie tray before diving into a game of killer bunnies – it’s a card game about the horrible murder of cartoon bunnies.  It’s fun and a good social game that can be as cut-throat as Wall Street before the bailout.  My bunny was murdered early in the game, but today’s picture is of that bunny: 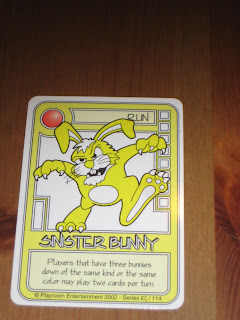 He was both sinister and yellow.  Yellow just doesn’t seem like a very sinister color to me, it’s so vibrant and cheerful.  In the end Rene won the game, and then promptly fell asleep on the couch.  We’re such hell raisers.