Big Friday and a bit of a headache to boot.

My day was going along rather well, had a Dodge audition, worked out (I’m really taking advantage of having a gym membership), and should have had a reasonably easy day – but it was not!

Rene has become one of a growing number of victims of a credit scam that is being perpetrated by a company called National Recovery Agency, also known as West Bay Acquisitions.  See they found a way to purchase the accounts of the both Columbia House and BMG Music Clubs, both companies are now out of business, and are not only sending fraudulent collections letters to people, but are also DECIMATING CREDIT HISTORIES!!!  Some stories show that there are victims who NEVER EVEN HAD AN ACCOUNT WITH EITHER COMPANY!!!!

We only had to do a simple search for the names of these companies to come up with some pretty shocking results that you can see an example of here, here and here.

We have taken steps to get this problem resolved.  Their fake $129 charge has dinged Rene’s credit by 76 points!!!!!!!  It’s been a killer for her credit.  If you’ve been contacted by either National Recovery Agency or West Bay Acquisitions please let us know.  Talk about your story in the comments.  I want to use the internet as a way to help shut these bastards down.

To be clear, so all you haters don’t take space claiming that we don’t want to pay our bills, this is a fraudulent charge – fake – should not exist.  The debt they claim to have purchased was “caused” six months AFTER BMG shut their doors.  It’s hard to buy a CD from a store that doesn’t exist.

Credit, what a pain in the ass. 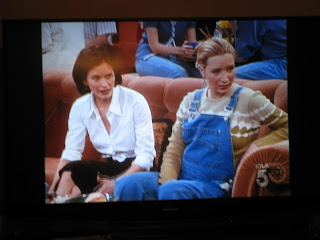 It’s from an episode of “Friends” that was on TV as I was on the computer.  I found this episode to be a nice source of laughter after the day we had.