Today was a pretty uneventful day.  The biggest news of the day, the news heard around the world, is that the United States Congress passed the Heath Care Reform bill.  It took over my Twitter page and filled up the Facebook news feed.  I don’t even know where I fall on the debate.  I know I agree with the idea of heath care reform, but I have not been able to keep up with the changes to the bill nor have I been able to cut through the bullshit both sides have been shooting at us for the last six months.

Political rant: I do not care for either party, Republicans or Democrats.  As far as I’m concerned they are all doing the exact same thing, spending my money on their pet projects, but they choose to spend it on different stuff.  I do not support or endorse anyone who is a career politician nor do I want to hear from someone who has ever listened to a lobbyist.  I just don’t like it.

All that being said, if HCR means that Rene is no longer punished for being a woman when it comes to getting insurance then I’m for that.  If I can get decent insurance that costs less than a quarter of my annual income then I’m for that too.  I look forward to hearing about what was actually passed today.  I have a feeling neither side really knows what that is yet.

Speaking of sides, have the lines been drawn on Facebook!  The arguments are getting fierce and this is just the first day.  Hard core Republicans are calling this the downfall of the country while hard core Democrats are calling it the salvation!  If we’re lucky it might fall somewhere in the middle and might just be the first step toward a real solution.

OK, no more political talk!  Today’s picture is of this: 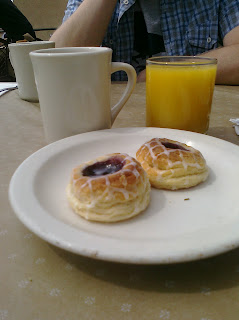 We went to brunch at the last minute after thinking we weren’t going to brunch.  It ended up being really fast, but really nice.  We’re going to miss Spadra when it’s gone, but we’re enjoying the experience while we can.  Today I got the breakfast quesadilla.  It was delightful.

Ugh, after reading this I’m dreading the possible comments that I might get, but I’m never one to back away from a good debate.  What are your thoughts on HCR?  Help convince me one way or the other.