I made moves toward a major decision today, I’ve decided to actively pursue my acting career again.

Now some of you may be thinking, “But Curtis did you ever really stop?  I’ve seen you talk about auditions on Twitter and Facebook.”  That’s true, but I’ve been embarrassingly passive in my efforts just waiting for auditions and that does not equal work, not often anyway.  So I’m becoming proactive again and doing all the things that working actors need to do to make themselves marketable.  In addition to the “behind the scenes” stuff I’m designing a new web site to replace the MySpace page that has been my URL placeholder and when it’s up I’ll let the world know.  In the meantime the Facebook fan page will be info central as well as this blog.

Today’s picture is of this: 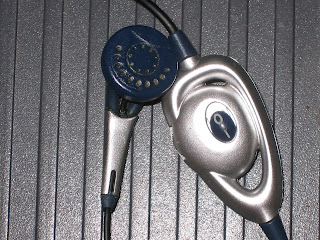 It’s the device that I conducted all of my business on today that wasn’t a computer.  Lot’s of people use headsets, but I like mine because it doesn’t go over my head, it just sits nicely in my ear.