A lot of my blogs have been about how tired I have been the last week or so and I’m sorry about that, but it’s what’s going on and when you blog daily a theme can develop.  Today I was not teaching but instead worked on a sizzle reel for a new show that the owner of our acting school is putting together.

It was truly invigorating to actually be on a working set again and not just negotiating financing or building business plans or any of the other office tasks that have taken up so much time the last couple years.  Ugh, I hate that I am writing the word “years” and it isn’t an exaggeration.  I’m glad 2010 is better than the last two years.

Anyway, after working on the shoot I went and baby sat Rene’s nieces and half assed watched the Grammys until about 9:15.  I didn’t see the Michael Jackson tribute or what folks on Facebook are calling Taylor Swift’s horrible performance (was she really flat through the whole song?).  What I did see I felt underwhelmed by.  I was excited by Lady Gaga’s opening act until the Elton John part.  I didn’t know that the contenders for album of the year were performing with their heroes so when he came out I was confused as to why he was there.  It also made the song anti-climactic in my opinion.  I did enjoy Beyonce’s rendition of “You Ought to Know” but the rest of the show left me wanting.

My picture of the day is me yawning. 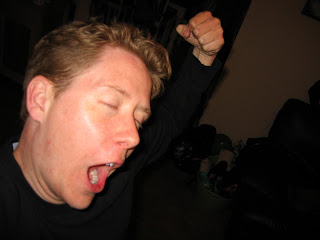