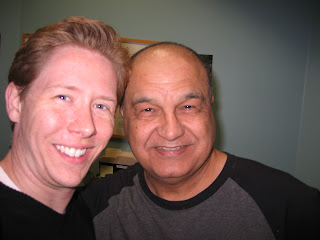 This is me and my friend Danny Martinez.  Danny and I teach the three to six year olds on Tuesday nights.

Here’s the snag in that oh so simple plan: they’re three to six years old.

Part of the balancing act that I try to instill on the parents of my kids is that they need to be kids first.  I suggest that they let us be super strict during the two class hours and then let home be a safe place where the rules are different and they don’t have to worry about performing.  Having grown up as a working child actor I was VERY fortunate that my parents were a constant support and didn’t over push me.  I understood that when I was on an audition or on set that I was on a job, but then when I got home I was just home and wouldn’t be shoved back into rehearsal.

A nice bonus is that we actually have some pretty talented kids who are impressive at their age.  When they learn how to read look out Hollywood!

The toughest part of the class is keeping them from climbing the walls – hence the two of us in the room.  Danny’s a really good guy.  Those of you who grew up in the L.A. area may remember his voice from KIIS, Star 98.7, K-EARTH 101, and just about every other radio station in the market.  He has turned his attentions to screen writing, and he’s good at it.  He used to act as well and raised four boys in the business so he’s really good with this age group.  The kids like my energy, he knows how to get good performances and the two of us with a roll of duct tape keep them kind of behaved.

That’s it for tonight, I’m exhausted and tomorrow I have casting gig so I’m going to get some sleep.